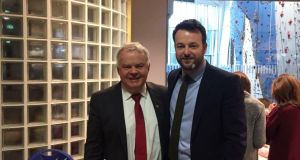 Tributes have been paid to the veteran SDLP politician John Dallat, who has died aged 73.

The first nationalist mayor of Coleraine, Co Derry, Mr Dallat had been an MLA since 1998 and served as deputy speaker at Stormont.

He had been diagnosed with cancer last year.

The North’s first minister Arlene Foster said she was “deeply saddened” to learn of his death. “We came from very different political outlooks but he was always to the fore in speaking up for his constituents,” she said.

The former SDLP leader John Hume and his wife Pat said he had been a “loyal friend” and a “loyal and faithful servant to the SDLP and the ideals for which the party stood for”.

“During a distinguished political career, he was always on the side of the underdog, defending those who were disadvantaged and standing strong against violence, sectarianism and unfairness in society.”

“In difficult times, John never flinched in doing what was right for his community and his country,” they said.

The SDLP leader Colum Eastwood described him as a “fierce and forensic champion of people and the public interest, as well as a good and loyal man” who would be remembered for his defence of the public purse as chair of Stormont’s Public Accounts Committee (PAC), and for his famous good humour.

“For over 45 years he was the most loyal servant to the people of East Derry and a fierce friend to everyone in the SDLP,” Mr Eastwood said. “I know I speak for everyone in the party when I say his good humour and wise advice will be sorely missed.

“John entered public life at a time and in a place when it was difficult to be an SDLP representative. I know that, despite his tough exterior, he was often hurt when the hand of friendship he extended across the sectarian divide in the late 70s and early 80s on Coleraine Council wasn’t always accepted. But it never stopped him trying and only strengthened his life-long resolve to oppose violence and its supporters,” he said.

From Kilrea, Co Derry, Mr Dallat was a business studies teacher at Carndonagh Technical College, Co Donegal from 1968 to 1974 and St Paul’s College, Kilrea from 1975 until 1998.

He was councillor on Coleraine Borough Council from 1977-2010 and in 2001 became the town’s first nationalist mayor.

He was elected to the Northern Ireland Assembly in 1998 and represented East Derry as an MLA until his retirement in 2016, but stood again in 2017 and was re-elected.

The East Derry MP Gregory Campbell was among those who sent his condolences to Mr Dallat’s family and colleagues.

“John and I fought many elections as rivals,” he said. “Our two approaches to constitutional politics were different but today I pay tribute to his work as an advocate for his electorate in East Londonderry.

“At a time when being in the political spotlight placed not only our lives but also our families’ lives in danger, John didn’t step back. Today, my thoughts are with John’s family and all those who are grieving.”

The Sinn Féin leader Michelle O’Neill said she was very sorry to learn of Mr Dallat’s passing, and her thoughts were with his family and SDLP colleagues.

The UUP leader Steve Aiken said Mr Dallat had “diligently represented the people of East Londonderry both in the Assembly and on the old Coleraine Borough Council – to which he was first elected in 1977 – and this length of public service is itself a remarkable tribute.”

Mr Dallat is survived by his wife Anne, his children Helena, Ronan, and Diarmuid and by his eight grandchildren.