Scene set for ugly confrontation ahead of Catalonia independence vote

Barcelona Letter: Many Catalans are less than enthusiastic for a divorce from Madrid 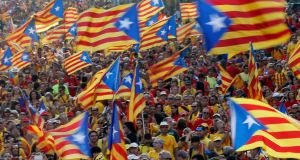 National Day of Catalonia in Barcelona, September 11th, 2014: Catalan nationalists say they will declare independence if they win a majority in the referendum, regardless of the level of participation. Photograph: Albert Gea/Reuters

Barcelona was the first city in Spain I ever visited, back in 1973.

The great Catalan capital was then resisting the dying clutches of the Franco dictatorship. I remember the menace of soldiers in coal-scuttle helmets, goose-stepping at the bottom of the Ramblas, rain pelting down, the streets barely lit.

But I also remember, much more vividly, the rich odour of history and culture that oozed from every worn stone of the adjacent medieval Gòtic Barri. I would, of course, have had to call it the Barrio Gótico in those days – had I been rash enough to ask a policeman for directions.

The Catalan language was no longer illegal, but its public use, especially by a foreigner, was still regarded with intense hostility by the regime.

Coming back four decades later, after a complete absence of nearly 20 years, it is good to find that the Gòtic Barri can still exercise its old magic.

After sunset, the smell of the chickens turning on spits outside the venerable Los Caracoles restaurant still draws me down the irregular maze of narrow streets, evoking the promise of Bacchanalia, or at least mystery and wonder, around the next corner.

There are new marvels, too: the Museu Blau is one of the finest natural history museums in the world, drawing on the great traditions of Catalan science.

But much bigger changes are afoot than new museums: Barcelona and the whole of Catalonia is on the verge of a transition that could be as momentous as the slow shift from dictatorship towards democracy that was under way on my first visit.

There is now a real, if still unlikely, possibility that the next time I visit the city it will no longer be Spanish in any sense, but the capital of an independent Catalonia.

The crisis is not obvious to the casual visitor. True, you see the single-starred banner of Catalan independence, the Estelada, displayed from apartments quite frequently. But you can easily walk an entire street and not see it at all. Many Catalans do not share the sudden fervour for a divorce from Madrid.

Ten years ago, most Catalan nationalists were pretty happy with the high level of self-government that their autonomous status had conferred upon them since 1980. They were more pragmatic than their more militant equivalents in the Basque Country, while still strongly asserting their distinct national identity.

But all that has changed utterly, for reasons too complex to dwell on here. The mainstream Catalan nationalists, with support from hard-left groups, are organising an independence referendum in October. Madrid will certainly use strong measures to try to ban it.

While the Catalan nationalists have a narrow majority in the Catalan parliament, they do not have the two-thirds required by their own autonomy statute to change the region’s status. Nor did they win a majority of the popular vote in the last election.

Yet they say they will declare independence if they win a majority in the referendum, regardless of the level of participation. And since most of those opposed to independence will not vote in a ballot they regard as illegitimate, the scene is set for an ugly confrontation.

Polarisation seems to be what the nationalists are seeking. There is a disturbing tendency to label as “fascist” anyone who doubts the wisdom of continuing with the referendum in these conditions, even from within the nationalist ranks.

I found deep anxiety about where this confrontation could lead, among people who know the situation intimately. They said the subject has now often become too contentious to discuss, even among lifelong friends.

Ironically, this fierce intolerance of dissent mirrors the attitude found in the ruling Spanish party, the right-wing Partido Popular, and in sections of the centre-left PSOE, on any proposal to recalibrate the Spanish state.

In 2010, the blank refusal of the Spanish nationalist establishment to accept a new Catalan statute that recognised the region as a “nation”, but kept it within Spain, was one (of several) factors that have radicalised Catalan nationalism.

One hopes it is not too late to step back from what looks increasingly like an abyss, and reach an accommodation between the plural identities that make up Catalan society.

Will Barcelona be Spanish or Catalan? Perhaps the real question is: can’t it be both?