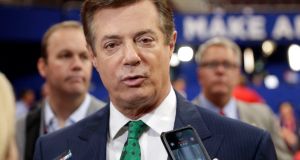 Former Trump campaign chairman Paul Manafort (above), along with Donald Trump Jr, is due to appear before the Senate judiciary committee next Wednesday. Photograph: Matt Rourke/AP

Renewed concerns about the ongoing Russian investigation and a continuing impasse on the Republican healthcare plan weighed on the US dollar on Thursday, as Donald Trump marked his sixth month in office.

A report by Bloomberg claimed that special counsel Robert Mueller has expanded his investigation to include the US president’s business transactions, a development that would mark a new front in the Russian investigation.

In an interview with the New York Times published before the Bloomberg report, Mr Trump warned Mr Mueller about probing matters directly outside the Russian investigation. Asked if the special counsel would overstep a red line if he examined Mr Trump’s family business, Mr Trump replied: “I would say yes . . . I think that’s a violation. Look, this is about Russia. ”

However, he declined to specify how he would respond if Mr Mueller began to probe his family’s business dealings.

The Trump campaign team’s alleged links with Russia are due to come into the spotlight next week when Donald Trump jnr and former Trump campaign manager Paul Manafort will testify before the Senate judiciary committee as part of Congress’s ongoing investigation into Russian interference in last year’s presidential election.

Both men attended a controversial meeting in Trump Tower last June which has become a flashpoint in the ongoing controversy over the Trump campaign team’s alleged links with Russia.

The committee confirmed that both men have been requested to appear next Wednesday. Mr Trump’s son-in-law and senior adviser, Jared Kushner, who also attended the June meeting in Trump Tower, is also due to be questioned in private by senators on Monday.

Mr Manafort resigned last August as Mr Trump’s campaign manager following revelations of his business dealings with pro-Russian Ukrainians. He previously worked for Ukrainian president Viktor Yanukovych, the pro-Russian leader who pulled out of an EU-Ukraine association agreement in late 2014, sparking the current conflict in the country.

Deutsche Bank, Mr Trump’s bank in New York, has also come into the spotlight in recent months, though Federal Reserve chairman Janet Yellen said earlier this month that there was no investigation into the bank that has loaned millions of dollars to Mr Trump during his career.

The White House on Thursday issued a memo outlining a list of achievements by the president since assuming office on January 20th, highlighting the appointment of supreme court justice Neil Gorsuch, the row-back of several Obama-era regulations and moves to “open up” America’s energy system.

But critics of the president point out that the administration has made little progress on major legislative changes such as healthcare or tax reform.

Mr Trump is due to hold a rally in Youngtown, Ohio next Tuesday. It follows similar campaign-rally style events in Florida, Iowa and Pennsylvania earlier this year.