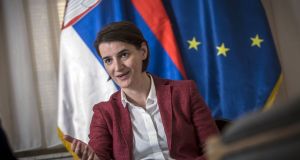 When Ana Brnabic became Serbia’s first female and first openly gay prime minister last month, the country’s civil society may have been expected to hail a major victory in the fight for equal opportunities.

But where some Serbs and foreign observers saw a historic breakthrough for the socially conservative Balkan state, leading activists suspected something very different – a “pinkwash”.

“That’s how we as a movement see it,” says Dragana Todorovic, executive director of the Belgrade-based Equal Rights Association (Era), which unites Balkan and Turkish advocacy groups for lesbian, gay, bisexual, transgender and intersex people.

“It’s a message for the European Union and the international community, aimed at masking increasing problems when it comes to other human rights issues, media freedom and democratic processes in Serbia, ” she adds.

“It’s obvious that this move is part of Aleksandar Vucic’s marketing.”

Helped by pliant media and state resources, Mr Vucic became Serbia’s president with a landslide election victory in April and then appointed Ms Brnabic (41) to succeed him as prime minister.

As premier and leader of the ruling Serbian Progressive Party, Mr Vucic (47) amassed immense power through a network of allies who fill leading political and security posts and run major corporations and media outlets.

Under the constitution the president’s role is largely ceremonial, but no one doubts that Mr Vucic remains the country’s undisputed leader, with a degree of control unseen in Serbia since the bloody rule of Slobodan Milosevic in the 1990s.

Mr Vucic ensured Ms Brnabic was approved by a somewhat sceptical parliament, and her cabinet is almost identical to the one he left behind, filled with close confidantes of his who wield far more personal clout than the inexperienced premier.

Most Serbian activists see no end to the pattern of recent years – growing pressure on civil society and independent media, continued failure to tackle corruption, and tacit approval of Mr Vucic’s dominance from an EU that values him as a stabilising factor in the Balkans.

“I call it doing a botox – making things look a bit prettier but generally staying the same,” says Anita Mitic, director of the Youth Initiative for Human Rights, a prominent Serbian NGO.

“I don’t expect any brave or independent actions from Brnabic,” she adds.

Educated at universities in the UK and US, Ms Brnabic worked in the private sector before Mr Vucic named her minister for public administration last year.

It was Mr Vucic who told the press that Ms Brnabic is a lesbian, and activists say she was never prominent in a Serbian gay community that still faces violence and discrimination, even if Belgrade’s pride marches are no longer attacked by far-right hooligans.

“I would say we still have big problems,” says Ms Todorovic.

“If you look at our legislation you’d think we were living in Sweden, because many of our laws are pretty good . . . but implementation is completely lacking.”

In her public comments, Ms Brnabic prefers to focus on the country’s slowly strengthening economy and how, under Mr Vucic, EU-brokered talks with the former Serbian region of Kosovo have opened the door to eventual EU accession.

Opponents of Mr Vucic – who served as information minister under Milosevic – say none of this should give him free rein to destroy checks and balances in a country where democracy and the justice system are still fragile.

They ask, for example, who ordered illegal demolitions in Belgrade to make way for a €3.5 billion construction project, and why certain ministers have retained their posts in Ms Brnabic’s cabinet despite damning revelations from Serbia’s leading investigative news outlet, the Crime and Corruption Reporting Network (Krik).

Krik’s journalists are denounced as western spies by Vucic-friendly media, and their private conversations and unpublished research have appeared in the pro-government press, suggesting they are under surveillance.

“We have a new prime minister and maybe the impression abroad is that everything will be different now in Serbia. But the power is still held by Vucic and his inner circle.”

Krik discovered that Ms Brnabic is more tightly connected to that inner circle than many thought – she went to school with scandal-plagued Belgrade mayor and key Vucic ally Sinisa Mali, and founded a firm with a lawyer who is closely associated with him.

“Brnabic has said she will consult with Vucic on tough decisions and also with [foreign minister] Ivica Dacic, ” Jovanovic says.

“She didn’t bring anyone new or close to her into government. This tells us she cannot control these [ministers], because they are all controlled by Vucic.”

Ms Brnabic has already stumbled on a key plank of Mr Vucic’s rule – the need to move down the long road towards the EU while maintaining strong ties with Moscow.

After reportedly saying Serbia would side with the EU over Russia if forced to choose, Ms Brnabic gave a transcript of the interview to Moscow’s ambassador in Belgrade to assure him that her words had been misconstrued.

“I think that was a very humiliating thing to do. She’s a representative of this country and shouldn’t be responsible to other countries,” Mitic says.

With Balkan politics still volatile and Russia keen to extend influence in the region, the West seems loath to criticise Mr Vucic’s brand of “stabilitocracy”.

“It works for both sides, but only on a PR level,” says Ms Todorovic at Era.

“I think it’s only a matter of time until things explode. There is pressure on civil society and media, and Serbian democracy is being taken apart piece-by-piece. Only the facade is still there.”