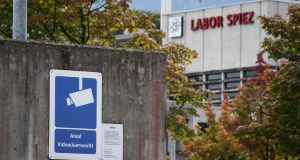 A view of the Spiez Laboratory in Switzerland. Photograph: Fabrice Coffrini/AFP/Getty Images

Switzerland’s intelligence agency said on Friday it had worked with British and Dutch counterparts to foil a Russian plot which according to newspaper reports was targeting a Swiss laboratory testing nerve agent Novichok.

Earlier on Friday a Swiss and a Dutch newspaper reported that authorities from the three countries had teamed up in an operation which resulted in the Netherlands expelling two suspected Russian spies in March.

Citing unnamed sources, the Tages-Anzeiger and NRC Handelsblad said the suspected agents were heading for the Spiez Laboratory near Bern that analyses chemical and biological weapons, including the Novichok nerve agent.

The Dutch government subsequently said later that month it would expel two Russian “intelligence agents” who worked at the Russian embassy in The Hague, without giving further details.

“Swiss authorities are aware of the case of Russian spies identified in The Hague and expelled from there,” the Swiss NDB intelligence agency said in a statement on Friday.

“The NDB took active part in this operation together with its Dutch and British partners. The NDB has thus contributed to preventing illegal activity targeting critical Swiss infrastructure.”

It did not elaborate.

The Russian embassy in Bern dismissed the Swiss account.

“We consider such false statements simply absurd and nothing other than another attempt to stoke an anti-Russian atmosphere,” it said.

The Dutch military intelligence agency MIVD did not immediately respond to requests for comment.

In the weeks after the Skripal poisoning, Britain and dozens of other countries kicked out scores of Russian diplomats, and Moscow responded tit-for-tat in the biggest wave of expulsions in the region since the Cold War. – Reuters