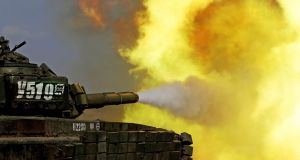 Russia is preparing to send as many as 100,000 troops to the eastern edge of Nato territory at the end of the summer, one of the biggest steps yet in the military build-up undertaken by President Vladimir Putin and an exercise in intimidation that recalls the most ominous days of the cold war.

The troops are conducting military manoeuvres known as Zapad, Russian for “West”, in Belarus, the Baltic Sea, western Russia and the Russian enclave of Kaliningrad. The drills will feature a reconstituted armoured force named for a celebrated Soviet military unit, the First Guards Tank Army. Its establishment represents the first time since the collapse of the Soviet Union that so much offensive power has been concentrated in a single command.

The military exercise, planned for many months, is not a reaction to sweeping new economic sanctions on Russia that the United States Congress passed last week. So far Russia has retaliated against the sanctions by forcing the expulsion of several hundred employees in US diplomatic posts in the country.

The move is part of a larger effort by Putin to shore up Russia’s military prowess, and comes against the backdrop of an increasingly assertive Russia

But the move is part of a larger effort by Putin to shore up Russia’s military prowess, and comes against the backdrop of an increasingly assertive Russia. Beyond Russia’s interference in the 2016 presidential election in support of the Trump campaign, which has seized attention in the United States, its military has in recent years deployed forces to Syria, seized Crimea and intervened in eastern Ukraine, rattled the Baltic States with snap exercises and buzzed Nato planes and ships.

Punishing sanctions by the United States and European allies that have isolated Russia further have done nothing to stop Putin’s sabre-rattling, as illustrated by the long-scheduled Zapad exercise. Even more worrying, top US military officers say, is that the manoeuvres could be used as a pretext to increase Russia’s military presence in Belarus, which borders three critical Nato allies: Poland, Lithuania and Latvia.

“The great concern is they’re not going to leave, and that’s not paranoia,” Gen Tony Thomas, head of the US Special Operations Command, told a national-security conference in Colorado in July. Peter B Zwack, a retired one-star army general who was the US defence attache in Moscow from 2012 to 2014, said: “First and foremost, the messaging is, ‘We’re watching you; we’re strong; we’ve learned a lot; don’t mess with Russia.’ ”

Western military officials caution that the United States and Russia are not on the brink of war. But they expressed concern that the heightened Russian military activity could lead to unintended confrontations. For this instalment of the Zapad manoeuvres, a cold-war relic revived in 1999 and held again in 2009 and 2013, Russia has requisitioned enough railway wagons to carry 4,000 loads of tanks and other heavy equipment to and from Belarus. The Russians already have about 1,000 air-defence troops and communications personnel stationed in Belarus, and logistical teams are surveying training sites there. By mid-August, advance elements of the thousands of Russian army, airborne and air-defence troops that are to participate in the exercise are expected to arrive. The rest of the force is expected to reach Belarus by early September, ahead of the Zapad exercises, scheduled for September 14th-20th.

The United States is taking precautions, including sending 600 US paratroopers to Nato’s three Baltic members for the duration of the Zapad exercise

The United States is taking precautions, including sending 600 US paratroopers to Nato’s three Baltic members for the duration of the Zapad exercise and delaying the rotation of a US-led battle group in Poland. “Look, we’ll be ready; we’ll be prepared,” said Lt Gen Frederick B Hodges, head of US army forces in Europe. “But we’re not going to be up on the parapets waiting for something to happen.”

In 2014, Russia’s stealthy forays into eastern Ukraine and its rapid capture of Crimea were seen as skilful exercises in “hybrid warfare”, a combination of cyberwarfare, a powerful disinformation campaign and the use of highly trained special-operation troops and local proxy forces.

But there is nothing subtle about the tank-heavy unit at the heart of the coming Zapad exercise. The First Guards Tank Army, made up mainly of forces transferred from other units, including elite motorised and tank divisions near Moscow, has an extensive pedigree. The unit battled the Germans during the Second world war on the Eastern Front and eventually in Berlin before becoming part of the Soviet force that occupied Germany. In 1968, it participated in the invasion of Czechoslovakia to crush the Prague Spring.

After the end of the cold war, the unit was withdrawn to Smolensk, near the border with Belarus, before being disbanded in 1998. But it was reconstituted by Putin to give the Russian military more offensive punch and present a visible demonstration of Russian power.

“That name was chosen for a reason,” said Philip M Breedlove, a retired four-star US air-force general who served as Nato commander. “It sends a very clear message to the Baltics and Poland.”

In addition, the Russians have fielded a new motorised division near Smolensk, which could be used in conjunction with the tank unit. In combination with the highly mobile tank army, that force has about 800 tanks, more than 300 artillery pieces and a dozen Iskander tactical-missile launchers.

Russia’s highly mobile tank army has more vehicles than Nato has in active units deployed in the Baltic States, Poland and Germany put together

That is more tanks than Nato has in active units deployed in the Baltic States, Poland and Germany put together, not including armour in storage that would be used by reinforcements sent from the United States, noted Phillip A Karber, president of the Potomac Foundation, who has studied Russian military operations in and around Ukraine.

“There is only one reason you would create a Guards Tank Army, and that is as an offensive striking force,” Hodges said. “This is not something for homeland security. That does not mean that they are automatically going to do it, but in terms of intimidation it is a means of putting pressure on allies.”

Russian officials have told Nato that the manoeuvres will be far smaller than western officials are anticipating and will involve fewer than 13,000 troops. But Nato officials say the exercise is intended to test Russia’s contingency plans for a major conflict with the alliance and will also involve Russian civilian agencies.

“We have every reason to believe that it may be substantially more troops participating than the official reported numbers,” Jens Stoltenberg, Nato’s secretary-general, said in July. Adding to the concern, the Russians have yet to agree that international observers can monitor the Zapad exercise. US officials have long said that monitoring is important, given the difficulty of western intelligence in determining whether Russian military activity is merely an exercise or a preparation for an armed intervention.

The total number of troops and other personnel in the broader Russian exercise is expected to range from 60,000 to as many as 100,000

The United States, in contrast, allowed Russian, Chinese and even North Korean observers to monitor a recent army exercise, called Saber Guardian, in Romania, Hungary and Bulgaria. At least two battalions of First Guards units, or some 3,000 armoured troops, are expected to participate in the Belarus manoeuvres. The total number of Russian troops, security personnel and civilian officials in the broader exercise is expected to range from 60,000 to as many as 100,000.

The question Nato officials are asking is whether all of the troops and equipment in Belarus will leave. Hodges said, “I am very interested in what goes in and what comes out.”