Bid to prosecute Tony Blair over Iraq war is blocked 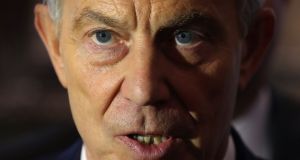 A British court on Monday rejected an attempt by a former Iraqi general to bring a private prosecution against former prime minister Tony Blair over the invasion of Iraq in 2003.

Blair’s decision to join the US-led coalition that toppled Saddam Hussein has tainted the legacy of his 10 years in office, and his critics in Britain and Iraq have been calling for him to face criminal action over the move for years.

Abdel Waheed Shannan al Rabbat had been trying to bring a private prosecution against Blair and two of his former senior ministers for what his lawyers described as the crime of aggression.

But the British High Court on Monday refused permission for a judicial review of an earlier ruling by a lower court that the action could not go ahead as there was no such crime under the law of England and Wales.

The former general’s lawyers had argued that the earlier ruling, delivered in November last year, was based on an incorrect premise and that it should be reviewed by the Supreme Court.

But two senior High Court judges rejected their arguments, saying they had no prospect of success in the Supreme Court and therefore the judicial review should not be authorised.

The judges accepted that there was a crime of aggression under international law, but said there was no such crime under domestic law, which meant a prosecution for that crime could not take place in domestic courts.

Blair and the two other targets of the action, former foreign affairs minister Jack Straw and former attorney general Peter Goldsmith, have taken no part in the legal proceedings.

Blair’s reputation has been severely damaged in the eyes of many Britons by his decision to go to war in Iraq and by the chaos and conflict that have continued to plague that country ever since.

A scathing report on Britain’s role in Iraq, published last year following a seven-year inquiry, described a catalogue of failures in Blair’s justification, planning and handling of the war.

Eight months before the 2003 invasion, Blair told then US president George W Bush, “I will be with you, whatever”, eventually sending 45,000 British troops into battle when peace options had not been exhausted, the inquiry said.

Blair has always denied lying to parliament and to the British people when he made the case for going to war, and continues to argue that the world is a better and safer place as a result of the toppling of Saddam.