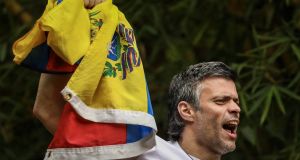 Opposition leader Leopoldo Lopez greets supporters from his home in Caracas, Venezuela, on July 8th. He was detained by security forces on Tuesday, after being previously jailed for inciting anti-government protests. Photograph: Miguel Gutierrez/EPA

Their detention comes just a day after a wave of international condemnation of the election for a controversial new constitutional assembly held on Sunday. A majority of Venezuela’s South American neighbours say the new body, dominated by supporters of President Nicolás Maduro after an opposition boycott, marks a break with Venezuela’s 59-year-old democracy.

According to the supreme court, Leopoldo Lopez and Antonio Ledezma, both former mayors of the capital Caracas, were detained because they were planning to flee the country. Both were already under house arrest.

Video posted on social media of Mr Ledezma’s arrest showed him being hauled off in his pyjamas as a woman screamed: “This is a dictatorship.” Mr Lopez’s wife also posted video of her husband being bundled into a car belonging to Venezuela’s intelligence agency. In a tweet of the video she wrote: “12:27 in the morning: moment the dictatorship kidnaps Leopoldo at my house. They will not break him!”

Mr Lopez’s lawyer said there was no warrant for his client’s detention and that he had complied with the terms of his house arrest following his release from prison a month ago. Mr Lopez was previously jailed for inciting anti-government protests while Mr Ledezma is accused of plotting a coup against Mr Maduro. Both have become symbols of the resistance to the chavista regime.

Opposition leader Julio Borges said their arrests were a show of the government’s “brute force in an attempt to scare society”. The UN called for the immediate release of the two men.

Their detention follows a speech on Monday by Mr Maduro in which he warned that the newly elected constitutional assembly would remove parliamentary immunity from members of the existing national assembly, which is the last institutional source of opposition to the government.

The official task of the new body is to rewrite the country’s constitution, which Mr Maduro’s own populist chavista movement drafted in 1999 under the auspices of his deceased predecessor and mentor, Hugo Chávez.

The vice-president of the existing national assembly, Freddy Guevara, reacted to Mr Maduro’s threats, warning “the only way they will end with this parliament is if they kill all 112 deputies and their substitutes”.

More than 120 people have died in political violence during the last four months. Discontent against the government has mounted in recent years after the economy collapsed following the drop in global oil prices. GDP has shrunk by more than a third since Mr Maduro was elected in 2013 and inflation is estimated to top 700 per cent this year.

Hunger is spreading as the government directs increasingly scarce oil revenue to servicing foreign debts run up during the last oil boom, with little left to pay for imports of food and medicines.

Neighbouring Brazil has led efforts by regional trade bloc Mercosur to open negotiations between the two sides but the country’s foreign minister said on Monday that Mr Maduro had rejected an invitation to talks in the country.

The next step is for the bloc to declare Venezuela to be in violation of its Ushuaia Protocol, which binds all members to observe democratic norms. That could open the way to sanctions against the regime in Caracas.

But already concerned at the delicate situation in the country, Brazil is worried that sanctions could provoke a total social collapse in Venezuela and spark a regional refugee crisis.