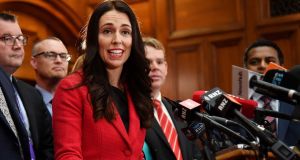 New Zealand’s opposition Labour Party appointed Jacinda Ardern as its new leader on Tuesday, less than two months before a general election, in a last-minute gamble to challenge the National Party’s decade-long hold on power.

Analysts described the move as a potential game-changer in a September 23rd election that had been seen as a slam-dunk for the centre-right National Party, which has been buoyed by some of the strongest recent economic growth among advanced countries.

“The circumstances may not be what Labour has planned for this campaign, but that has not weakened my resolve or my focus or my team’s resolve,” Ms Ardern told a news conference.

“I stand absolutely by the broad vision that we’ve presented . . . the idea that everyone deserves a decent roof over their heads, a warm, dry home, access to good quality education,” she said.

Ms Ardern, a member of parliament since 2008 and a former International Union of Socialist Youth president, said she would focus on inequality and discuss a “few different ideas” with her team after taking stock over the next 72 hours.

Her message echoed the optimism that propelled Emmanuel Macron this year to become the youngest French head of state since Napoleon, and helped Justin Trudeau win the 2015 Canadian election decisively at the age of 43.

Labour also hopes that the same kind of surprise factor that saw Britain’s Conservatives lose their parliamentary majority and Donald Trump become the US president could rub off on New Zealand politics.

“It will create a novelty factor, it will create some interest in the party, it will make it much harder for Bill English to campaign against her,” he said.

Ms Ardern is also vying to become the third female prime minister, after Helen Clark and Jenny Shipley, in a country that gave women the vote in 1893.

Another important factor could be whether Labour under Ms Ardern gathers enough votes to make it a viable coalition partner, particularly with Winston Peters’s king-making New Zealand First party.

“She has that X-factor and warmth a modern politician needs,” said University of Otago lecturer Bryce Edwards.

“If Labour does get a boost out of Ardern . . . it becomes more viable for Winston Peters to justify going with Labour after the election,” he said.

Mr Peters, who has been a senior member in previous National and Labour governments, said only that his party would decide after the election.