Refugees on Greek islands at risk as NGOs withdraw services 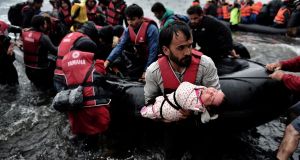 Refugees and migrants arriving on Lesbos after crossing the Aegean Sea from Turkey. Médecins Sans Frontières says two-thirds of mental-health patients on Lesbos were victims of violence before arriving in Greece. Photograph: Aris Messinis/AFP/Getty Images

Pregnant women, children and disabled asylum seekers stuck on the Greek islands are at risk of losing vital services as funding for charities in the area draws to a close next week, volunteers and human rights activists have warned.

On Monday the majority of European emergency funding for NGOs working on the Greek islands will come to an end as the Greek government takes over the management of support services for asylum seekers. Volunteers and activists on the islands have warned that supports for vulnerable refugees are at risk of ending when the Greek government assumes responsibility next week.

The development comes as the aid agency Médecins Sans Frontières says the health and well-being of the most vulnerable on the islands is at risk due to “a grossly deficient screening system” and policies aimed at returning as many people as possible to Turkey.

The charity says two-thirds of mental health patients on the island of Lesbos were victims of violence before arriving in Greece, while about half of the women presenting at clinics for gynaecological consultations have been victims of sexual violence. With the number of sea arrivals to Lesbos quadrupling in June, MSF said the system for screening and identifying vulnerable people had broken down.

Rob Moloney, an Irish volunteer with Lesvos Solidarity, an open refugee camp which provides legal, medical and psychological support for refugees, says conditions on the island have deteriorated significantly since his last visit to Greece in December 2016.

Mr Moloney says there are increasing reports of torture and police brutality inside the Moria refugee camp on Lesbos, one of Greece’s biggest, which he says is inaccessible to most NGOs. He has also witnessed brutal police tactics, including the use of teargas, against refugee protestors.

Despite EU attempts to stem the flow of asylum seekers arriving in Europe through the introduction of the EU-Turkey deal in March 2016, Mr Moloney sayss that hundreds continue to put their lives at risk each day by crossing the Aegean Sea.

“This problem hasn’t ended – we had another boat with 100 people arrive this morning,” Mr Moloney told The Irish Times, speaking on the phone from Lesbos. “People are still coming here seeking refuge but as a result of the EU-Turkey deal they’re stuck on an island that many consider an open air prison.”

Michael Raber, who co-founded the Swiss Cross Help charity with his wife after their holiday to Greece in 2015, says a lack of planning by the Greek government in its takeover of management of services will only further isolate the most vulnerable.

“One of the main problems is identifying vulnerable people who were tortured, pregnant women, children and newborns. These people need to be identified because they have the right to leave the island.”

“In 2016 these people still hoped the European public would see them on TV and react. They believed that when the cameras showed up Europeans would do something. Now that illusion is gone. Europe is stripping these people of their freedom.”

A spokesman for the European Commission said it was working to ensure “no sector was left unfunded” on the islands and that the needs of asylum seekers remained covered during the changeover in funding and management. He said the commission was aware of the Greek authorities’ use of teargas during riots at the Moria camp and that “all staff, some children women and families” were evacuated.

“The commission and the EU agencies are working with the Greek authorities every day to support them to improve the reception conditions on the islands and to speed up the asylum procedures,” he said. “The commission has also provided substantial financial support to the Greek authorities to establish hotspots, provide accommodation, food, medical care, legal support and improve the security of the facilities on the islands.”