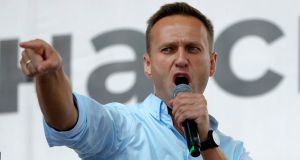 Russian opposition leader Alexei Navalny was arrested on Wednesday as law enforcers battled to contain a wave of protests over a forthcoming local election in Moscow.

Mr Navalny has called for a mass rally in the Russian capital next Saturday to protest against the barring of opposition candidates from a Moscow City Duma – or parliament – election in September. City authorities have not sanctioned the meeting outside Moscow mayor Sergei Sobyanin’s office, a short distance from the Kremlin.

Police detained Mr Navalny as he left his Moscow home to go jogging early on Wednesday. “I went out to run and buy flowers for my wife whose birthday it is today,” the opposition leader wrote on Instagram. “A little bus was waiting outside with Omon [riot police]. Now I’m sitting in my shorts like a fool at a police station.”

A Moscow court later charged Mr Navalny with organising an unauthorised public meeting – an offence that carries a penalty of up to 30 days in prison.

Mr Navalny’s arrest came after three weeks of protests in Moscow culminating in a huge rally last weekend where more than 22,000 people gathered to demand free and fair elections. Delivering an ultimatum to the authorities, Mr Navalny called for an even larger meeting outside Mr Sobyanin’s office next Saturday unless all opposition candidates were registered for the Moscow City Duma poll .

Most of the 45 deputies in the outgoing city legislature are pro-Kremlin and election planners appear keen to keep it that way. Moscow’s Election Commission first demanded that all independents collected thousands of voter signatures to support their registration for the ballot. Twenty opposition activists who overcame that challenge were then disqualified on grounds that some signatures were invalid.

Ella Pamfilova, head of the Russian Election Commission, advised disappointed candidates to appeal against the rejection of their signatures on Tuesday. However, she said it was “unrealistic” to expect they would all get on the ballot.

Following Mr Navalny’s arrest on Wednesday, police stepped up pressure on the opposition leader’s team taking Oleg Stepanov, the head of his Moscow office, into custody.

The Russian Investigative Committee opened a criminal investigation into a protest outside the Moscow Election Commission’s office early this month where several demonstrators refused police orders to disperse.

Ilya Yashin, an opposition politician who heads the municipal council in Moscow’s Krasnoleninsky district, said Mr Navalny’s arrest would not stop next Saturday’s demonstration from going ahead. Under Russian law, election candidates had the right to meet freely with voters, he wrote on Twitter.