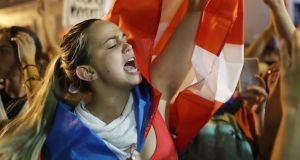 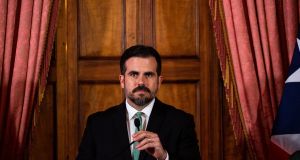 Puerto Rico governor Ricardo Rosselló was weighing his political future on Wednesday after almost two weeks of protests demanding his resignation over the publication of offensive chat messages and a corruption scandal, his spokesman said.

Mr Rosselló, a first-term governor in his first elected office, has resisted calls to step down over a scandal local media have dubbed “Rickyleaks.” Media, including El Nuevo Día newspaper, cited unnamed sources as saying his resignation was imminent.

“He stated yesterday he is in a process of reflection, and listening to the people,” the governor’s spokesman Anthony Maceira said in a text message to Reuters. “Whichever decision he makes will, as always, be communicated officially.”

Protesters had cheered the reports of a possible resignation late on Tuesday but warned that Mr Rosselló’s departure would not end the demonstrations that were now entering their 12th day.

The island of 3.2 million people has been rocked by multiple crises in recent years, including a bankruptcy filing and a devastating hurricane in 2017 that killed about 3,000 people.

If Mr Rosselló steps down, his replacement as the US territory’s leader would likely be justice secretary Wanda Vazquez, whom protesters reject because of her ties to the 40-year-old governor.

A string of Mr Rosselló’s closest aides have stepped down as prosecutors investigated the scandal. The governor’s chief of staff Ricardo Llerandi resigned on Tuesday, citing concerns for the safety of his family.

The protests in the capital San Juan were spurred by the publication on July 13th of chat messages on the messaging app Telegram, in which Mr Rosselló and aides used profane language to describe female politicians and gay Puerto Rican celebrities, including the singer Ricky Martin.

The federal judge hearing that case, Laura Taylor Swain, is expected at a hearing in San Juan on Wednesday to receive updates from Puerto Rico’s federally created financial oversight board and the island’s government.

A board spokesman said on Tuesday a plan for restructuring the bulk of Puerto Rico’s government debt was moving forward and would be submitted in court “as soon as reasonably possible,” despite the unsettled political situation.

But the recent resignation of Puerto Rico’s government liaison to the board and the head of the government’s fiscal authority has complicated the process, according to two people familiar with the matter, who asked not to be named due to the sensitivity of talks.

“The board’s communication with the government has stalled,” one of the sources said.

In a statement on Tuesday, the board said it hoped “the political process swiftly resolves the current governance crisis so Puerto Rico can move forward to rebuild trust and to focus government on those it is here to serve”.

Matt Fabian, who heads market and credit research at Municipal Market Analytics, said it would be “inappropriate” for the board to push ahead with the debt restructuring now.

“The commonwealth needs to consolidate its leadership, figure out who’s in charge and have the government re-legitimatise itself,” he said.

Only Mr Llerandi has so far said publicly he has handed in his phone.

Mr Rosselló has apologised several times for the chats and asked Puerto Ricans to give him another chance. He also has vowed not to seek re-election in 2020.

“The people are talking and I have to listen,” Mr Rosselló said in a statement on Tuesday. But the island’s leading newspaper, as well as prominent US Democratic officials and Republican president Donald Trump, have called on him to step down. – Reuters