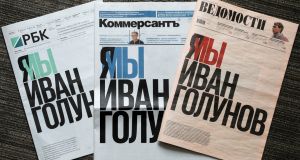 Russia’s three top business dailies ran identical front pages on Monday, declaring “I am/We are Ivan Golunov” after an investigative reporter of that name was arrested on highly questionable narcotics charges that could land him with a 10-year jail term.

Russian journalists are closing ranks in solidarity with Mr Golunov, whose articles digging deep into official corruption appear to have made him some powerful enemies. Thanks largely to their efforts, the case is at the centre of a blaze of publicity and looks set to become a landmark for justice and freedom of speech in Russia.

Mr Golunov, a special correspondent for the Latvia-based Meduza online news service, was arrested in Moscow late last week and charged with possessing and planning to sell illegal narcotics. He said police planted the drugs found in his rucksack and flat and claimed the charges had been fabricated to punish him for a recent report detailing the murky dealings of the Moscow funeral services.

He also claims that law enforcers beat him after his arrest and denied him the right to contact his friends and legal advisers. Police have denied wrongdoing.

Hundreds of journalists queued outside the Russian interior ministry on Friday night to stage one-man pickets – larger demonstrations are forbidden in Russian law without official permission – to demand their colleague’s release. There were more protests on Saturday outside a city court where formal charges were read out against Mr Golunov.

In an unusual move, the judge defied the prosecutor’s request to commit the defendant to a pre-trial detention cell and instead ordered him to stay under house arrest for two months. Supporters of Mr Golunov say the judge’s relative leniency indicates that the Kremlin may yet backpedal on the case.

“House arrest is not sugar,” says Ekaterina Shulman, a Russian political scientist and commentator. “But from this position it is possible to fight further.”

Part of a pattern

Mr Golunov’s case is not unprecedented and follows a pattern where Russian law enforcers plant drugs on critics and shut them up with jail sentences. What is unusual is that he has the support of the Moscow journalist community, who are determined to keep his plight at the centre of public attention.

Thanks largely to these efforts Russian celebrities, rock stars and rappers, as well as ordinary folk, have spoken up in Mr Golunov’s defence. In a startling measure of the media furore, Mr Golunov’s name got more hits on Russian social media on Saturday than Vladimir Putin, who was in St Petersburg attending a prestigious investment forum.

It is the job of Kremlin-controlled television to back the authorities unquestioningly. However, an unnamed police officer interviewed on the popular Vesti news programme on the Rossiya-1 channel on Saturday sounded slightly sheepish when describing the planning of Mr Golunov’s arrest. Sitting with his back to the camera, he said that law enforcers had no idea that their target was a famous journalist with prominent backers who could make a fuss.

If the Kremlin was caught off guard by the protests, it may be hoping that interest in Mr Golunov’s case will die down before he is brought to trial. Some observers believe that Mr Putin will not wait that long and will intervene to settle the matter at his annual “Direct Line” question and answer conference with Russians next week.

Kremlin spokesman Dmitry Peskov declined to comment about Mr Golunov on Monday, saying only that the case had “raised a large amount of questions that required clarification”.