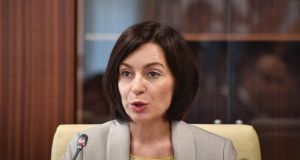 The EU, Russia and the US have called for the peaceful resolution of a major political crisis in Moldova, where rival governments are vying for control of the graft-plagued country that has been pulled between east and west for decades.

All three powers appear ready to work with a new government that was formed on Saturday when the pro-EU Acum alliance and the pro-Russian Socialists unexpectedly formed a coalition, more than three months after inconclusive parliamentary elections.

However, the Democratic party, which controlled the outgoing government, rejected the move, and Moldova’s constitutional court upheld its claim that the deadline for forming a new cabinet had expired and any bid to do so was now illegal.

At the request of the Democrats, the court also briefly suspended Moldovan president Igor Dodon, a former Socialist leader and close ally of the Kremlin, and his replacement swiftly dissolved parliament and called snap elections for September.

The new government of former education minister Maia Sandu held its first meeting on Monday, but Moldovan media reported that ministries and the police force were still taking orders from the old cabinet of Democrat Pavel Filip, which also convened in the capital, Chisinau.

Ms Sandu, a strongly pro-western reformer who studied at Harvard and worked at the World Bank, said her government’s priority was the “de-oligarchisation” of Moldova, with the main target being Vladimir Plahotniuc, the country’s richest tycoon and chairman of the Democrats.

“Moldova became a state that was isolated from the outside world because of the actions of one party and the usurper Vladimir Plahotniuc,” Ms Sandu told her ministers, who were barred by police from entering the normal cabinet meeting room.

“Unless we liberate the country from them, Moldova won’t be able to move forward,” she added.

At a parliament session boycotted by the Democrats on Monday, deputies voted to set up a commission to investigate the theft in 2014 of some $1 billion from three banks in Moldova, which is one of Europe’s poorest countries.

The European Parliament described Moldova last year as “a state captured by oligarchic interests”, and the EU suspended funding for the state after its courts used a technicality to cancel anti-corruption campaigner Andrei Nastase’s victory in the Chisinau mayoral election; on Saturday, he was named interior minister.

“Dialogue between democratically elected representatives must remain the key to finding a solution to the current political crisis,” they added.

The US state department urged “all Moldovan parties to show restraint” and said that “the will of the Moldovan people as expressed in . . . elections must be respected without interference.”

Moscow seeks to retain influence in ex-Soviet Moldova and keeps thousands of troops in Transdniestria, a region of the country run by pro-Moscow separatists.

Russia’s foreign ministry said on Monday it “welcomes the formation of a ruling coalition and government”, adding that the “only possible way to end the internal political crisis in Moldova is dialogue between all responsible political forces”.