Greece’s election shows the powerlessness of its politicians 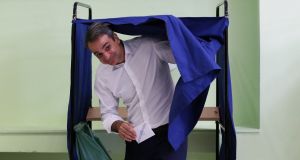 The hefty vote for opposition party New Democracy (ND) in Greece’s local and European polls has precipitated a general election scheduled for July 7th. It had been anticipated for some months, as the government of Alexis Tsipras’s Syriza inevitably lost support in the face of continuing austerity.

But austerity is not the only issue on which the campaign will be fought. There are subliminal as well as obvious topics aggravating both the state and its electorate, with more than 500,000 new voters, including 100,000 17-year-olds.

In addition to the economy, international issues will feature. The North Macedonia name deal reached earlier this year, ongoing relations with Balkan neighbours, and Greece’s place in an EU increasingly disturbed by populism and nationalism are all matters for a discriminating electorate. With Albania and North Macedonia poised to begin EU accession talks, and Turkey’s chances diminishing, Europe’s southeast, with Greece as its most significant region, is a hot potato.

More likely, we will hear empty rhetoric from all sides, half-truths, insinuations, and meaningless slogans, as well as, on the government side, blatant handouts, which began last month to no avail.

The major indictment against Tsipras is that he has failed to honour his commitments to the EU and IMF: the radical measures they demanded in order to reboot the economy have largely gone unheeded, resulting in credibility fatigue.

At least in 2015 Syriza and Tsipras offered reasons for optimism: reforms, transparency in government, reduction of the national debt and the elimination of the austerity programme.

Successive governments of ND and Pasok had allowed a financial crisis to develop, partly due to the perceived need to westernise not only the economy but also Greek society itself. The mistakes they made were cultural and social as well as administrative and statistical; when they told lies to Europe they were also deceiving themselves and the Greek people.

Tsipras found a way to insert Syriza into the credibility gap between them, spinning his own narrative, which has now been demonstrated to be equally misleading. The fact that he achieved nothing in the area of reform is not necessarily a reason for rejecting Syriza, since no other party is capable of implementing changes without a paradigm shift in political thinking.

None of the party leaders can actually offer any realistic programme to alleviate the economic crisis which remains central to most people’s lives. Moreover, the incoming government will have to deal with new faces in Germany and the EU who will affect Greece’s fortunes, and who may be even less friendly towards Greece than their predecessors.

For his part, ND leader Kyriakos Mitsotakis is not only lacklustre but, as the scion of a political dynasty that helped to create the crisis, he is anathema to voters who will not tolerate “more of the same”. When he announces that ND will maintain “the ethos and style” that distinguishes his party, voters understand this as “conservative elitism”, rather than Tsipras’s “socialist elitism”.

The only transparent thing about Mitsotakis is that, whatever he says, you can see right through him. By contrast, as a political manipulator, Tsipras has made opacity a fine art.

Tsipras’s only positive achievement was to resolve the name dispute with North Macedonia, but the “triumph”, as it has been called, was not his own: he was coaxed into it by the EU and the UN, and even then he was pilloried by Mitsotakis for betraying the national heritage.

While the electorate may smile more on Mitsotakis than on Tsipras, Greece’s economic situation will remain dire for the foreseeable future

Despite a nine-point lead in last month’s elections, ND would most likely take 140 seats in a general election, 11 short of an overall majority, making coalition inevitable. Mitsotakis’s options will depend on the fate of smaller parties, which come and go in parliament depending on whether they achieve the 3 per cent of the national vote necessary to elect MPs.

Neither the hardline communists (KKE) nor the neo-Nazi Golden Dawn are a potential coalition choice, leaving ND looking at Kinal (Movement for Change), the new centrist party that has risen awkwardly from the ashes of ND’s old rival, Pasok.

While the electorate may smile more on Mitsotakis than on Tsipras, Greece’s economic situation will remain dire for the foreseeable future. The fact that this is only a mirror of its graver social and cultural situation is given little overt consideration but exercises every citizen.

The central, unspoken issue in this upcoming election, as in every poll since the foundation of the state, is Greece’s role and status in the Balkans as a country that is ethnically and culturally related to both east and west, to such a degree that it can never be said that it belongs exclusively to either. Above all, Greece needs not only politicians, whom it has in abundance (about 10 million of them), but statesmen, of whom it has none.