Russian journalist dies after setting herself on fire 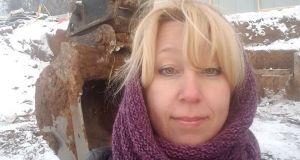 The editor of a Russian news website died after setting herself on fire outside a regional police headquarters on Friday, a day after officers searched her residence.

Russia’s Investigative Committee confirmed the death of Kolza.Press editor Irina Slavina in Nizhny Novgorod, a city of 1.2 million about 235 miles east of Moscow.

Ms Slavina reported on Thursday that her home was searched by police, although the nature of the search was not clear.

The independent news site Meduza reported that Ms Slavina left a message on Facebook saying her death should be blamed on Russian authorities.

Prior to her self-immolation, Irina Slavina wrote on her Facebook page: “I ask you to blame the Russian Federation for my death.”

Koza Press is a small local news outlet that advertised itself as having “no censorship, no orders ‘from above’”. A day before her death, she wrote on Facebook that police officers and investigators had searched her apartment, writing that they were looking for “brochures, leaflets and accounts” from the Open Russia opposition group, which is financed by Kremlin critic Mikhail Khodorkovsky.

She said they seized notebooks, her laptop and other electronics, as well as her daughter’s laptop and her husband’s mobile phone.

The committee’s local branch in the Nizhny Novgorod region later said that Slavina’s self-immolation had nothing to do with the searches carried out at her apartment on the previous day. It said she was only a witness in the criminal case for which the searches were being carried out. Members of Russia’s opposition said Slavina had been under pressure from the authorities. – AP/Reuters