‘Neutrality of public service’ and training of ‘citizens, not believers’ part of French plan 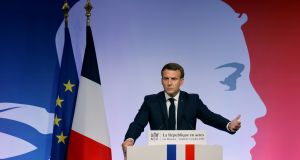 French president Emmanuel Macron: “We built our own separatism, that of our neighbourhoods, through the ghettoisation of our Republic.” Photograph: Ludovic Marin

“We must attack separatist Islam,” French president Emmanuel Macron said on Friday in a long-awaited speech on France’s relations with its Muslim minority.

Macron defined separatist Islam as “a conscious, theorised, politico-religious project which is at odds with the values of the Republic”. He said it leads to a “counter society” in which children are removed from school, while sports and cultural activities are exploited as sectarian vehicles of indoctrination.

The ultimate goal of “separatist Islam” was “to take control” of society, Macron said. He reminded his audience that three years ago, police commandant Jean-Baptiste Salvin and his partner, Jessica Schneider, were murdered near Les Mureaux, the town 40km west of Paris where he delivered the speech.

Macron also alluded to the Pakistani immigrant who wounded two people with a meat cleaver on September 25th. That attack took place outside the former offices of Charlie Hebdo, the satirical weekly where 12 people were murdered by jihadists in January 2015.

One year ago on Saturday, four police employees were murdered by a colleague, a convert to Islam, at the police prefecture in Paris, Macron recalled. “We must admit that there is a radical Islamism which . . . makes violence banal, and which leads some of our children to choose the worst . . . Islamist terrorism.”

‘Promise of the Republic’

The French president acknowledged that the state shares a degree of responsibility. “We built our own separatism, that of our neighbourhoods, through the ghettoisation of our Republic,” he said. “We often concentrated populations according to their origins and social milieu . . . We created neighbourhoods where the promise of the Republic was not kept.”

Macron delivered a similar speech in Mulhouse last February 18th. His administration has closed an additional 60 cafes, a total of 212, since then. The number of mosques closed remains the same, at 15. A total of 15 cultural and sports clubs have been shut down.

In February, too, Macron denounced fundamentalist parents who withdraw their children from public schools. For at least five years, French governments have promised to end the influx of imams from Algeria, Morocco and Turkey, and foreign funding for mosques.

But there was something more intense and alarming about the examples cited by Macron om Friday, for example an illegal school “where young girls, age seven, wore full-length veils”.

A draft law to fight “separatist Islam” is to be presented in cabinet on December 9th.

Some mayors had allowed “sectarian menus” – without pork and including halal dishes – in school canteens, he said. Some have segregated men from women with separate hours in swimming pools. The new law will authorise prefects to suspend such measures.

For the first time, government subcontractors will be subject to laws regarding “the neutrality of public service”, Macron said. He cited “abuses” in public services, particularly transport. “Bus drivers who refuse to allow women to board because they consider them to be indecently dressed, employees who want to wear ostentatious signs of religious affiliation.” At Roissy Charles de Gaulle airport, more than 80 employees were under surveillance, he said.

Radical Islamists identified associations as “the most efficient space for spreading their ideas”, Macron said. They began providing services that secular associations or the government did not provide as a way of “spreading the message of radical Islam”.

Until now, associations could be disbanded only for terrorism, racism or anti-Semitism. The draft law will add other reasons including “attacking a person’s dignity” or “psychological or physical pressure”.

Associations that receive government funding will be required to sign “a contract of respect for the values of the Republic”. If that contract is broken, Macron said, the leaders of the association will have to reimburse subsidies.

Macron has asked the French Council of the Muslim Faith (CFCM) to restructure Islam in France. In particular, he wants “to protect leaders of mosques from putsches, from hostile takeovers by extremists”.

More than 50,000 children are now home schooling in France, Macron said. That number increases each year. Fundamentalist parents claim their children are taking courses by correspondence, but they are often enrolled in illegal, sectarian schools.

Last week, Macron said, the government identified one such school in Seine-Saint-Denis, north of Paris. “Walls, almost no windows. The children arrive every day at 8am and leave at 3pm. They are greeted by women in niqab [full-length veils].” When questioned, the children said they mostly learned prayers.

To counter such practices, school will become compulsory for all children from the age of three in September 2021. Home schooling will be allowed only for medical reasons.

A programme called Elco, under which the Arabic language and civilisation was taught by teachers sent from Algeria, Morocco and Turkey, will be ended. The purpose of French schools, Macron said, “is to train citizens, not believers”.