Explainer: Why are Armenia and Azerbaijan fighting? 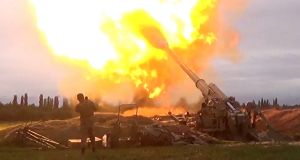 Early on Sunday, Armenia announced it was declaring martial law, mobilising its army and ordering civilians to shelter. It claimed its neighbour Azerbaijan had launched a military operation inside a disputed region called Nagorno-Karabakh. Azerbaijan said it attacked only in response to Armenian shelling.

Nagorno-Karabakh is recognised internationally as Azerbaijan’s territory but has a mostly Armenian population who have resisted Azerbaijani rule for more than a century. In 1991 the region declared independence and since then it has ruled itself – with Armenian support – as the unrecognised Republic of Artsakh.

Despite signs in the past two years of possible progress towards peace, one of Europe’s “frozen conflicts” has erupted again. Since Sunday, forces from Nagorno-Karabakh along with the Armenian military have been fighting Azerbaijani troops, armour and aircraft. More than two dozen people have been killed including civilians, and hundreds more are said to be injured. Azerbaijan has claimed to have taken territory inside Nagorno-Karabakh, a claim the Armenians dispute, and it appears to be a fluid situation on the ground.

Nagorno-Karabakh, a mountainous, landlocked region inside the borders of Azerbaijan, has been a source of dispute since before the creation of the Soviet Union. Tensions were suppressed when both Armenia and Azerbaijan were Soviet states, but they re-emerged as the cold war ended and Communist party control of the bloc dissolved.

A war between Armenian and Azerbaijani forces ended in a ceasefire in 1994, with Armenia in full control of Nagorno-Karabakh and other smaller enclaves of Azerbaijan’s territory.

The border between the two is considered one of the most militarised in the world, said Laurence Broers, the Caucasus programme director at Conciliation Resources, a peace-building group.

“We have a situation where we have trench warfare going on in Europe more than 100 years after the first World War,” he said. “In some areas the lines are so close they can hear and potentially talk to one another.”

Azerbaijan is majority Muslim and Armenia is majority Christian, and some elements on both sides seek to cast the conflict in religious terms, though analysts say this angle is exaggerated (Azerbaijan, for example, maintains strong defence ties with Israel).

Why are they fighting now?

An Armenian revolution in 2016 ushered in a new generation of leadership and raised hopes that the Nagorno-Karabakh conflict could move towards resolution. Those aspirations have since dwindled, with Armenia’s prime minister, Nikol Pashinyan, taking a firm line on the issue similar to his predecessor’s.

With the Covid-19 pandemic taking a toll on the price of Azerbaijani oil and gas, it may be that its rulers have decided now is a good time to act, Broers said. “They may have thought: perhaps it’s an idea to have an operation now, rally the population around the flag, make some territorial gains and re-enter the peace process from a position of strength,” Broers said.

Azerbaijan says it is responding to Armenian aggression in areas that are legally its territory and which have been occupied by enemy troops and separatists for decades.

Why does it matter?

Other than the humanitarian issue, with civilians on both sides being killed, the conflict sparks international concern for a few reasons. The major one is that regional powers including Russia, Turkey and Iran are invested in the South Caucasus to varying degrees. If the fighting is left to fester, “you could have a process of sleepwalking, as you did in the first World War, into a larger regional conflict”, Broers said.

Turkey has already declared its staunch support for Azerbaijan, while Russia is traditionally closer to Armenia, though its ties with Azerbaijani elites have grown. The two countries have been jostling for influence in different theatres around the world including in Syria and Libya. Armenia has claimed that Turkey is sending Syrian fighters into the area to fight on Azerbaijan’s side, though there is not yet strong evidence for this and Azerbaijan calls it “complete nonsense”.

The wider South Caucasus is a crucial artery for gas and oil from Azerbaijan into Turkey and on to Europe and other world markets. Azerbaijan supplies about 5 per cent of Europe’s gas and oil demands (helping to reduce the EU’s dependence on Russia), and fighting in 2016 came close to a number of these pipelines. – Guardian