New York awakes as streets burst slowly back into life

America Letter: Despite dimmed theatres and empty hotels, the city is no ghost town 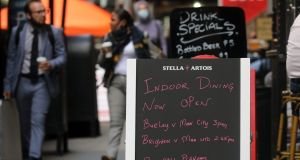 Manhattan’s skyline is one of the world’s most recognisable sights, its soaring skyscrapers and sparkling steel a symbol of American energy and modernity.

Returning to the city this week for the first time since the coronavirus outbreak was a novel experience, in more ways than one. For the first time I took the route into the city by car – navigating the swirling freeways and exits of the New Jersey turnpike, driving into the Lincoln Tunnel that burrows below the Hudson river, before re-emerging into the heart of midtown Manhattan, blinking into the sunlight.

It was a perfect New York day – the leaves just edged with red, the sky impossibly blue. Just a few weeks after the 19th anniversary of the September 11th attacks, the visual images of that day came flooding back.

New York found itself at the epicentre of the US’s coronavirus epidemic when it first surfaced. In mid-March, the city began to shut down. Within a few weeks, New York was in crisis. Some 1.9 million residents had contracted the disease by early April, with New York state reporting 1,000 deaths per day at the peak of the outbreak. Businesses and schools closed, a field hospital was set up in Central Park and thousands of New Yorkers fled the city.

Six months after the city first went into shutdown mode, New York is slowly coming back to life.

This week New York city public school students returned to the classroom – a milestone in the city’s fight against the virus. It followed an intense battle between mayor Bill de Blasio and teachers’ unions. With the threat of a strike looming, on September 1st de Blasio struck a deal with the main union to delay indoor teaching to later in the month.

The city also took another step towards normality this week with the easing of dining restrictions. On Wednesday, restaurants and bars were permitted to reopen to 25 per cent capacity, following the lead of neighbouring New Jersey which opened for indoor dining with reduced capacity three weeks ago – one of the last states to do so.

But while the opening-up of the city was welcomed by New Yorkers, it coincided with a rise in the number of coronavirus cases. With the city having successfully staved off a second wave, de Blasio announced that the positivity rate for coronavirus tests had risen to over 3 per cent for the first time in months.

Most of the rise appeared to reflect high infection rates in some areas of Brooklyn, particularly in Orthodox Jewish areas. The mayor warned he would stop in-person instruction in schools if the average positivity rate stayed above 3 per cent for seven days.

While the return of students and indoor dining is a positive step, the impact Covid-19 has had on the commercial life of one of the world’s largest financial centres is enormous. Most of New York’s offices remain empty, as employees continue to work from home.

According to a report from commercial property company CBRE, only 10 per cent of the city’s workforce were back at their desks last month – one of the lowest rates in the country. The knock-on effect on smaller businesses and restaurants has been devastating. Commercial and residential property prices have taken a dive, as many New Yorkers reconsider their living plans, swapping the city for suburban areas in Connecticut and New Jersey.

Other sectors of New York life are also struggling.

Near Times Square this week the lights on Broadway were dimmed, with the theatre district continuing to shut its doors for the foreseeable future. The Metropolitan Opera this week announced the cancellation of its 2020-2021 season, a further blow for the culture sector.

The absence of tourists has also hit hotels. Many have closed, while rooms at a four-star hotel can be picked up for a little over $100 (€85).

And yet, the spirit of New York is coming back. As thousands of residents make a tentative return to the city after the summer, the streets this week were bubbling with life. Outside diners paved the streets, residents whizzed by on bikes and e-scooters, eschewing the subway, and the honking of car-horns filled the air.

Trump dismissed New York as a “ghost town” at this week’s presidential debate. De Blasio fought back on Twitter with pictures of outdoor diners socialising and enjoying an outdoor band. “Doesn’t look like a ghost town to me,” he quipped. New York, like the rest of the United States, will be back.