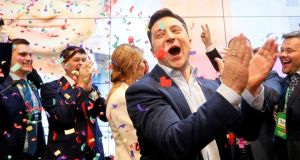 Western leaders have congratulated Volodymyr Zelenskiy on his landslide victory in Ukraine’s presidential election and pledged continued support for Kiev, while Russia put the onus on the erstwhile comedian to start a rapprochement between the former allies.

With almost all ballots counted from Sunday’s election run-off, Mr Zelenskiy had 73.2 per cent of votes against 24.4 per cent for Petro Poroshenko, who took office in 2014 after Ukraine’s Maidan revolution and Russia’s annexation of Crimea.

Mr Zelenskiy’s closest brush with politics until now was playing a teacher who becomes president in a television comedy, but he appealed to millions of Ukrainians who are sick of the corruption and impunity of the country’s elite.

As well as promising to bring a new, open style to the nation’s politics and to root out graft, he vowed to try to end a five-year war in the eastern Donbas region with Moscow-led militants, without letting Russia drag Ukraine back into its orbit.

European Council president Donald Tusk and European Commission chief Jean-Claude Juncker congratulated Mr Zelenskiy and Ukraine on an election that showed the country’s “strong attachment to democracy and the rule of law”.

“This is a major achievement in the complex political, economic and security environment, against the backdrop of continuous challenges to Ukraine’s territorial integrity,” they wrote in a joint letter to Mr Zelenskiy.

“As president of Ukraine, you can count on the EU’s strong support to Ukraine’s reform path, including consolidating the rule of law, fighting corruption, maintaining macro-financial stability and pursuing the essential reform of the energy sector,” they added.

German chancellor Angela Merkel and French president Emmanuel Macron were among European leaders to send greetings to Mr Zelenskiy, who is expected to take office next month.

Kurt Volker, the US special envoy to Ukraine, said President Donald Trump had “called to congratulate Volodymyr Zelenskiy for his electoral victory and the Ukrainian people for a peaceful and democratic election. We will continue to support Ukraine’s efforts to restore its territorial integrity and counter Russian aggression.”

Moscow offered a more tepid response to a hard-fought, colourful and generally clean election that was closely watched in Russia, where political competition has been crushed by Vladimir Putin during two decades in power.

“For now, it is premature to talk about congratulations from President Putin to Mr Zelenskiy or about the possibility of joint work,” Kremlin spokesman Dmitry Peskov said on Monday.

“It will be possible to judge [Zelenskiy] only by concrete actions.”

Meanwhile, Russian prime minister Dmitry Medvedev said: “I have no doubt that regarding Russia the new head of state will stick to the same rhetoric . . . and repeat the well-known ideological formulas.”

He added: “At the same time there is still a chance of improving co-operation with our country. What is needed for that? Honesty. And also a pragmatic and responsible approach.”

Mr Medvedev said economic ties between the neighbours could be restored only on the basis of “an understanding of the deep value of relations between the people of our countries, which should be above political considerations.”

Russia still denies that it illegally annexed Crimea and ultimately controls separatist militants in Donbas, however, while continuing to squeeze Ukraine’s economy with measures including a ban on sales of oil, coal and petroleum products, which Mr Medvedev announced just last week.

Mr Zelenskiy has said he will continue to seek implementation of beleaguered 2015 Minsk peace agreement to halt fighting that has killed about 13,000 people, displaced 1.6 million and placed a swath of Ukraine’s industrial heartland outside government control.

On election night, he said his “number one task” was to free all Ukrainians captured by Russia during the war, including 24 sailors detained when Russian boats fired on and seized three Ukrainian ships in the Black Sea last November.

“I spoke to the parents and, you know, it’s impossible to react calmly to that. I will do everything to bring . . . our lads back home,” he said.

Mr Zelenskiy also talked about launching “a powerful information war” to counter Kremlin propaganda in militant-controlled areas, which may include creating a new Russian-language television channel to broadcast across Donbas.

After his inauguration as president and commander-in-chief, Mr Zelenskiy has said he will appoint new people to lead Ukraine’s security service, prosecutor general’s office and military general staff – organisations that have been accused of incompetence and corruption under Mr Poroshenko.

The election-winner’s team also outlined the first pieces of legislation that he intends to put before parliament, including Bills on a process for impeaching the president and for stripping deputies of their immunity from prosecution.

While settling into the presidency, Mr Zelenskiy will also face the task of building up his nascent political party before parliamentary elections expected in October, when Ukraine’s established politicians – including Mr Poroshenko – will seek to inflict and early and chastening defeat on the novice leader.

1 Eyewitness to Auschwitz: ‘We were held in the wagons like animals’
2 Chinese virus-hit city of Wuhan closes transport networks
3 Eating out in Dublin – the homeless way
4 Chance for political ‘earthquake’ with non-FF or FG government- Boyd Barrett
5 Man who killed Jastine Valdez ‘looked possessed’ before shot by garda
Real news has value SUBSCRIBE