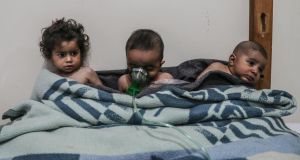 Children receive treatment after a gas attack on al-Shifunieh village, eastern Ghouta, Syria, on February 25th, 2018. The picture was part of a story that has won second prize in the Spot News - Stories category in the World Press Photo 2019 Contest. Photograph: Mohammed Badra/EPA

All roads lead to Damascus. For nearly eight years Syrians braved bombs and checkpoints to travel to the capital, and since the guns fell silent on most fronts they continue to arrive.

Regardless of whoever is in power, Damascus has always been the core of Syrian identity and legitimacy. This is why the government has fiercely defended the capital and given it priority over all other cities, notably Aleppo, once Syria’s largest city and commercial hub.

The government’s tight grip on Damascus gives it a major national, political, and psychological advantage over the exiled opposition. Even during the days when insurgent groups occupied capital suburbs and sectors of Aleppo, Homs, Deraa and Deir al-Zor, the government took a hard line in UN-mediated negotiations because it held Damascus.

Now that the government also controls two-thirds of Syria’s territory and administers 85 per cent of the 18 million Syrians remaining in the country, it con- tinues to resist concessions. The expatriate opposition supported by the West, Saudi Arabia and Turkey cannot compete with the authority that possession of Damascus gives the government – albeit with the support of Russia and Iran.

Nevertheless, sources involved in the off-and-on again negotiations for a political settlement tell The Irish Times there is movement. An expatriate civil society source involved in talks says the government has taken “little incremental steps” toward a transition over the last year.

Pro-government armed groups have been drafted into the state security apparatus while the government has absorbed ad hoc administrative entities into state structures. Gradual refugee return has been organised under Russian auspices and the government has published a list of all detainees and disappeared persons, the source said.

Efforts now focus on the formation of a constitutional commission consisting of representatives of the government and opposition groups.

The civil society source said the constitutional commission was “the only game in town”. “Russia sent a message [to the Syrian government] that it must take part. But [the government] is not free to make concessions because it must balance between left and right to keep constituents happy. Opposition factions are divided and have no grassroots support.”

The appointment as UN mediator of Geir Pedersen, a former Norwegian diplomat, is considered a positive development. Following meetings with Syrian foreign minister Walid Muallem at the weekend, Pedersen said, “We have had detailed substantial discussions. We are now addressing all the issues, so all the issues are on the table.”

This was his third visit since assuming the post in January. His predecessor, Staffan de Mistura, had not been welcome in Damascus for two years.

“The sides are engaging and they are close to establishing a 150-member constitutional commission,” states Sawsan Zakzak, a member of the Women’s Advisory Board. All Syrian parties except the Kurds – excluded at Turkey’s insistence – are to be represented on the commission – government, opposition, and civil society, she says. Once this is formed she hopes intra-Syrian talks will resume in Geneva. “The commission will choose or elect a technical committee of 18-20 to draft the document.”

The Women’s Advisory Board was created in 2016 by de Mistura to represent women from Syria and the diaspora. The board originally had 12 members but now has seven from Syria and 10 from outside.

Ms Zakzak says the technical committee will first have to decide whether to amend the 2011 constitution or draft a new one. The presence of a third party – civil society groups – is essential, she argues, because the “government and opposition consider each other to be enemies”.

Since the Arabs do not want to be ruled by Kurds, tribesmen have been making separate deals with the government

She points out that the constitution will have to define the powers of the presi- dent and parliament, the role of religion and the status of women, and guarantee freedom of speech. All these issues are highly controversial.

Meanwhile, the Kurds have dropped demands for autonomy and the transformation of Syria from a unitary state into a federation. They are now asking to retain their paramilitary force and control over Kurdish towns and cities they administer in the northern Hasakah and Raqqa provinces.

With US support, the Kurds control 25 per cent of Syria, but they account for only 30 per cent of the population in this area. Since the Arabs do not want to be ruled by Kurds, tribesmen have been making separate deals with the government. The Kurds can be expected to follow suit once the Trump administration decides whether and when to withdraw its 2,200 troops from the northeast.

An informant from Hasakah province tells The Irish Times, “American, British, French, German, Saudi and Emirati” troops are based there. The recently deployed Arab contingents give the US-led anti-Islamic State coalition an Arab face but the mix of forces complicates the situation in these provinces.

The Syrian army remains determined to recapture northwestern Idlib province, occupied by al-Qaeda’s Hay’at Tahrir al-Sham and jihadi allies, although Russia and Turkey have compelled Damascus to postpone an all-out offensive since Idlib has 3 million residents, half of them displaced persons.