Russia and Turkey try to limit damage after envoy’s murder

Moscow and Ankara say killing will not wreck still-fragile rapprochement 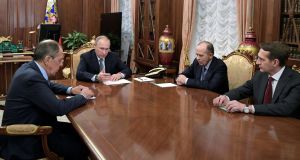 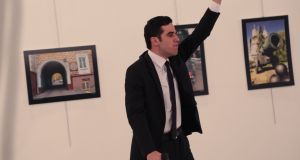 An unnamed gunman gestures after shooting the Russian ambassador to Turkey, Andrei Karlov, at a gallery in Ankara, Turkey. Photograph: Burhan Ozbilici/AP Photo

The shots that killed Russia’s ambassador to Turkey in an Ankara art gallery on Monday also sent shockwaves through fragile relations between two major powers with a very recent history of enmity.

Even in the first hours after Andrei Karlov’s death, however, there were signs of how Moscow and Ankara would seek to handle the shocking incident – by continuing their rapprochement and deflecting blame away from each other’s authorities and their policies.

It is only 13 months since Ankara’s military shot down a Russian warplane over the Syria-Turkey border, prompting a furious reaction from Moscow, which imposed of a range of sanctions on Turkey and halted joint economic projects.

The deep freeze in relations, accompanied by sharp comments from Russian president Vladimir Putin and Turkish counterpart Recep Tayyip Erdogan, began to thaw last June, when Turkey’s leader sent a letter of apology to the Kremlin.

The two countries agreed to soothe relations and renew economic co-operation while continuing to disagree fundamentally over the future of Syria, where Russia backs president Bashar al-Assad and Turkey remains deeply opposed to a leader whom it describes as a “tyrant”.

This pragmatic approach was behind plans for the foreign and defence ministers of pro-Assad Russia and Iran to meet their Turkish counterparts in Moscow on Tuesday to discuss Syria’s future – with Ankara determined above all to stop Kurdish militias gaining more ground near Syria’s border with Turkey.

If those talks go ahead, they will be overshadowed by Monday’s murder of Russian career diplomat Karlov (62) at an exhibition of photographs entitled “Russia through the eyes of Turks”.

Both sides sought to begin damage limitation on Monday night, however.

Erdogan was quick to brief Putin on developments, as Russian diplomats said the killing would be raised at the United Nations Security Council.

Leonid Slutsky, chairman of the committee on security in Russia’s lower house of parliament, said “the main thing is that there will not be another chill in relations between Moscow and Ankara, no matter how much our strategic opponents . . . would like that.”

“I think tomorrow, despite this beastly tragedy that will overshadow these talks, something constructive will nonetheless be achieved . . . We are obliged to do that in memory of Andrei Gennadiyevich Karlov.”

Alexei Pushkov, a prominent pro-Kremlin Russian deputy, blamed the attack on critics of Russia’s bombing campaign in Syria – where it is accused of causing massive civilians casualties, particularly in the erstwhile rebel stronghold of eastern Aleppo.

He wrote on Twitter that the murder “was a result of the political and media hysteria whipped up around Aleppo by Russia’s opponents”.

Franz Klintsevich, a senior member of Russia’s upper house of parliament, said he “had no doubt, that the terrorist’s hand was guided by radical Islamists.”

“And the aim is clear – revenge against our country for Syria, and at the same time an attempt to put Russia and Turkey at loggerheads.”

The Turkish foreign ministry said in a statement that Karlov “was a brilliant diplomat and a wonderful person, who successfully worked in Turkey during the most difficult time, and will remain in our memory forever. We will not let this crime cast a shadow over Russian-Turkish relations.”

The mayor of Ankara, Melih Gokcek, said the “attack had the aim of harming Russian-Turkish relations” and suggested the killer could be linked to Fethullah Gulen, the exiled cleric whom Turkey blames for a failed coup last July against Erdogan.

Maria Zakharova, spokeswoman for Russia’s foreign ministry, described Karlov’s murder as a “tragic day in the history of our country and diplomatic service”.

Referring to Turkey’s downing of the Russian warplane in November last year, she added of Karlov: “He did everything to overcome the crisis in Russian-Turkish relations that was caused by those tragic events of one year ago.”