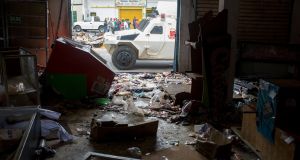 At least three people died and 405 people were arrested, officials said, in protests and looting over the weekend that followed the socialist government’s elimination of the largest currency bill.

The opposition put the death toll at five, though authorities confirmed only that a man, a woman and a 14-year-old boy were shot dead in the worst-hit state of Bolivar in the south.

Raimon Moya (29) stood in the safety of a police station 100m from where looters attacked her butcher’s shop in the state capital, Ciudad Bolivar.

“It’s like watching them kill a child,” she said. “You work all your life for something, and they destroy it in minutes,” she added. Some 350 outlets were looted in the city.

In response to the mayhem, Venezuela’s socialist president, Nicolas Maduro, has postponed the planned elimination of 100-bolivar notes until January 2nd in order to allow time for new larger bills to enter circulation.

The removal of the 100-bolivar bills, before replacement notes were in place, left many people unable to pay for basic goods and transactions in the busy run-up to Christmas.

That heaped hardship on to Venezuelans already suffering scarcities of food and the world’s highest inflation.

In Ciudad Bolivar, residents formed barricades in the streets to protect themselves and shops from further violence.

Some formed shifts to watch from rooftops all night.

In the Andean highland town of La Fria, in Tachira state, rubble and packages lay strewn on the ground as National Guard soldiers stood watch.

Some local government offices also were attacked, one by arsonists, and 33 people arrested in La Fria at the weekend. “I’m ruined, I don’t have words to describe what happened,” said Nelson Roa, owner of a destroyed food shop there.

Mr Roa said he ran for help when looters started throwing stones at his store, and brought back two soldiers in his car whom he found at a traffic light. “They couldn’t do anything.”

Mr Maduro said the currency measure was needed to combat criminals on the border with Colombia hoarding bolivars to fuel contraband and sabotage his leftist administration.

He also accused political opponents of whipping up violence, at the behest of US president Barack Obama, to seek a coup against him.

Washington denies constant accusations of meddling, although government supporters recall US approval of a short-lived coup against Mr Maduro’s predecessor, Hugo Chavez, in 2002 during the George W Bush administration.

Opposition leaders say Mr Maduro has only himself to blame for incompetent economic policies that have stirred Venezuelans’ anger. Opponents are now calling for Mr Maduro to resign after having had their push for a referendum to remove him thwarted by election and judicial bodies who seldom go against the government.

The 54-year-old former bus driver and foreign minister, who replaced Mr Chavez in 2013, has seen his popularity plunge during a three-year recession. His term runs to January 2019.