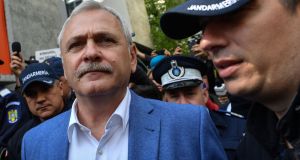 Liviu Dragnea had dominated the PSD and ran the government from behind the scenes, engineering the removal of two prime ministers. Photograph: Daniel Mihailescu/AFP/Getty

Liviu Dragnea, the head of Romania’s ruling party and de facto leader of its government, started a 3½-year jail sentence on Monday after a Bucharest court threw out his appeal against a corruption conviction.

Supreme court judges upheld a 2018 verdict that Mr Dragnea incited abuse of office by procuring fake jobs in a state agency for two women who were actually working for his Social Democratic party (PSD).

He was already barred from public office due to a 2016 conviction for vote rigging, but could have benefited from the government’s drive to soften Romania’s anti-corruption legislation and introduce an amnesty for people found guilty of certain graft offences.

Television cameras followed Mr Dragnea’s car as it took him through Bucharest to Rahova prison on the outskirts of the city, leaving the PSD in turmoil just a day after it suffered a heavy double blow at the ballot box.

The party came second in European elections with 23.4 per cent – down from 37.6 per cent in the equivalent ballot in 2014 and 45.7 per cent in 2016 parliamentary elections – and saw 80 per cent of voters reject its judicial reform plans in a non-binding referendum that was held in parallel.

Dan Barna, leader of the USR-Plus alliance that came a close third behind the PSD, said the verdict “ends the era of Liviu Dragnea, one of the blackest periods of the last 30 years”.

“Romania is recovering. We are coming back to Europe, ” he added.

Mr Dragnea (56) dominated the PSD and ran the government from behind the scenes, engineering the removal of two prime ministers who showed signs of independence and challenged his authority.

He remained determined to have the government extend political power over the judiciary and overhaul the criminal justice system, despite sparking Romania’s biggest street protests since its 1989 revolution and incurring warnings from senior European Union officials who feared for the country’s rule of law.

The controversy has strained relations between Bucharest and Brussels during Romania’s current EU presidency, as has the government’s bid to prevent Laura Codruta Kovesi from becoming the bloc’s first chief prosecutor, having forced through her dismissal last year as head of the country’s anti-corruption agency.

As Mr Dragnea’s car weaved through traffic, protesters shouted “To jail!” and he was met at the prison gates by more demonstrators who chanted: “The door of justice is finally closed!”

Senior PSD members were expected to hold an emergency meeting on Monday evening, but prime minister Viorica Dancila, a loyal ally of Mr Dragnea, said she had no intention of stepping down or calling elections.

“We will make an analysis to see what we did wrong and we will try to win back our electorate,” she said at party headquarters.

“I think the best solution would be to continue our governing programme.”

The EU will hope Mr Dragnea’s departure will prompt the PSD to rethink reforms that have put it on the same track as Hungary and Poland, where populist governments are at odds with Brussels over perceived threats to democratic norms.

Hungary’s ruling party, Fidesz, took 13 of the country’s 21 seats in the European Parliament on Sunday, and prime minister Viktor Orbán has threatened to defect from the centre-right European People’s Party to the nationalist group led by Italian interior minister Matteo Salvini.

“I think there will be brutal debates in the upcoming weeks and months in the EU political arena on the future of the European Union,” Hungarian foreign minister Peter Szijjarto told Euronews on Monday.

“So far these debates were already hit by emotions. Let’s see if the end of the campaign period will cool down the tensions and the atmosphere – or not.”