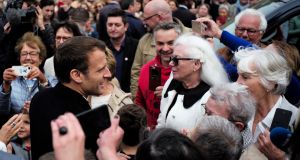 French president Emmanuel Macron: had upped the stakes by stressing the “existential risk” involved in the elections. Photograph: Kamil Zihnioglu

French president Emmanuel Macron’s defeat at the hands of Marine Le Pen’s Rassemblement National looked like a major setback on Sunday night. But in the light of morning, the glass was half full.

When the interior ministry’s final results were issued, the RN was less than one percentage point ahead of Macron’s La République en Marche (LREM), at 23.31 per cent to 22.41 per cent. The two parties won exactly the same number of seats in the European Parliament, 23 each.

“It is neither a victory nor a rout nor a defeat,” Nathalie Loiseau, who headed LREM’s list, said on Europe 1 radio. “It’s a good score.”

Macron had upped the stakes by stressing the “existential risk” involved and by promising to “devote all [his] energy so the RN doesn’t win”. The election was to a large extent a referendum on Macron’s leadership, but he managed to limit the damage by finishing less than two points behind his score in the first round of the 2017 presidential election, which is considered the most accurate measure of political support.

For Le Pen, improving her first-round score by two percentage points compared to 2017 was a kind of revenge for her abysmal performance in a May 2017 debate with Macron and the thrashing she received in the runoff.

In her victory speech on Sunday night, Le Pen positioned herself and her party for upcoming elections in 2020, 2021 and especially the next presidential election in 2022, saying “a great movement for alternation has been born tonight”.

The far-right performs well in EU elections because they are proportional, one-round polls. In all other elections, the French system eliminates all but the frontrunners in the second round, which works against the RN. In national polls, Le Pen’s party has been unable to break a “glass ceiling” of about one-third of the electorate.

Whether one labels it “progressives versus populists, Europeans versus nationalists or globalists against patriots, this new division now structures French politics”, Le Figaro’s front-page editorial said.

Unlike Le Pen, Macron has a reservoir of potential allies and represents a public opinion that is basically pro-European, regardless of the president’s low approval ratings. Of the 79 French MEP seats won on Sunday night, 50 went to pro-EU parties: LREM (23), the green party Europe Ecologie Les Verts (13), the conservative Les Républicains (eight) and the Socialist alliance with Raphael Glucksmann’s Place Publique (six).

Only 29 French MEPs will represent anti-EU lists: 23 for RN and six for Jean-Luc Mélenchon’s far-left France Insoumise or LFI. Le Pen and Mélenchon hate one another and are ideologically incompatible.

Macron can work with all French pro-EU parties. The speaker of the National Assembly, François de Rugy, is a former Ecologie Les Verts deputy. Macron is reportedly establishing “entrance” groups to facilitate the co-option of conservative and Socialist politicians by LREM.

Macron’s attempt to turn the EU elections into an EU-wide poll, with international lists, was rejected in Strasbourg last February. But the French leader’s dream of a European polity is nonetheless progressing.

The excellent performance of the French Green Party was also consistent with the European trend. “We are participants in a European green wave,” said Yannick Jadot, the head of the Europe Ecologie Les Verts (EELV) list. “We want ecology to become the matrix that makes our society live, evolve, grow and prosper.”

Nathalie Loiseau, the head of the LREM list, said she hoped EELV would ally itself with Macron’s group in the European Parliament. Exit polls showed that EELV siphoned voters, in descending order of importance, from the former Socialist presidential candidate Benoit Hamon, whose group won not a single seat in Strasbourg, from Mélenchon’s far left and from Macron.

The EELV won the highest percentage of votes from under 34 year olds. “Henceforward it will be impossible to win the youth vote without talking about the environment,” a cabinet minister told Le Figaro. “Ecology is the new religion.”

The conservatives of Les Républicains had attempted to lure voters from RN with promises of a crackdown on immigration and Islamism. They failed miserably. Likewise, Macron tried to win Green voters with environmental policies. But as Jean-Marie Le Pen, the founder of the French far right, always said, voters prefer the original to the copy.