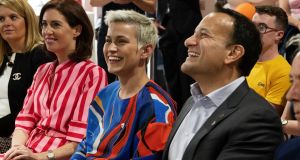 Fine Gael’s Maireád McGuinness romped to victory in the European constituency of Midlands North West, topping the poll with 22 per cent of the vote.

The 59-year-old sitting MEP, first elected to the European Parliament in 2004, received 134,630 votes, exceeding the quota by 16,000 votes and raising the prospect of bringing in her running mate Maria Walsh.

Ms Walsh, a former Rose of Tralee and first-time candidate, came fourth with 11 per cent of the vote, coming behind sitting MEPs Independent Luke “Ming” Flanagan, who received 14 per cent, and Sinn Féin’s Matt Carthy, who received 13 per cent.

Mr Flanagan is in strong contention to take the second of four seats.

This puts Ms Walsh in a likely fight with Mr Carthy along with Independent Peter Casey, who received 9 per cent of the vote, and the Green Party’s Saoirse McHugh, who received 8 per cent, for the final two seats in a constituency that stretches from Co Donegal to Galway to the Dublin commuter belt.

It could be midweek before all counts are completed to fill the four seats.

“I would be confident quietly that we are going to take the two seats, which would be just magic, absolutely magic,” said Ms McGuinness, whose commentary on Brexit has brought her an international profile.

The distribution of her surplus votes in the second count on Monday night extended Ms Walsh’s vote by 6,036 to 70,536 consolidating her fourth-place position and putting her 12,688 votes ahead of Mr Casey. She trails Mr Flanagan, in second place, by 16,070 votes and Mr Carthy, in third, by 7,951.

Mr Carthy said he knew the constituency would be “a dog fight”, and that his third place finish on first preferences was “better than we would have feared” in light of Sinn Féin’s poor performance in the elections.

“We’ll get our shares of transfers. I’m just not sure if we will get a big enough share, because the problem is the candidates we were going to be fighting with are fairly transfer-friendly in their own right.”

Ms McHugh came sixth with 51,019 votes – four percentage points behind that 12 per cent she received in Friday’s RTÉ/TG4 exit that catapulted into her third place with a surprise chance of a seat.

Looking at her first-preference votes, Green Party leader Eamon Ryan had doubts that the 28-year-old Achill Islander would receive the transfers from other candidates to put her in contention for a seat.

“There are just not enough blocs of transfers that might allow her to transfer...I think it is still pretty much unlikely,” he said.

He still praised her performance as a “remarkable achievement” for a first-time candidate in a constituency that has been difficult for the Green Party. “I said to her, think of the Aviva Stadium full of people, that’s the vote you got.”

Fianna Fáil’s candidates Brendan Smith, a Cavan-Monaghan TD, and Anne Rabbitte, a Galway TD, came seventh and eighth, with just 7 per cent and 5 per cent of the vote respectively.

Ms Rabbitte said she was not disappointed given “how well” Ms McGuinness had done during the campaign.

She defended the party’s decision to run two candidates and to split the constituency. “I liked the strategy. I didn’t look for a change of strategy. Of course we are disappointed.”

Mr Smith said it was a challenge coming up against three strong incumbent MEPS who had benefitted from a higher profile arising from Brexit.