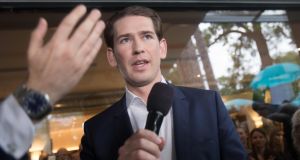 Germany’s and Austria’s centre-right leaders struggled on Monday after the EU elections, for very different reasons.

Chancellor Angela Merkel’s Christian Democratic Union (CDU) is facing an identity crisis as just 29 per cent of German voters still agree that it is the country’s undisputed Europe party.

In Austria, chancellor Sebastian Kurz and his Austrian People’s Party (ÖVP) saw jubilation over a seven-point jump in EU election support cut short by a no-confidence vote that ejected them from power after just 18 months.

“Nobody understands the toppling of this government,” said Mr Kurz in a heated parliamentary session, promising to lead a transition government.

What happens next in this unprecedented crisis depends now on Austria’s president, Alexander Van der Bellen.

Resignations and walk-outs by FPÖ ministers prompted Mr Kurz to appoint caretaker ministers in their stead until a snap election in September.

Seeking revenge, FPÖ parliamentarians on Monday voted with the opposition in the 186th and first successful no-confidence motion against a sitting government in post-war Austrian history.

We are in a highly emotional phase in Austrian domestic politics, and this emotion is difficult to steer in the public debate

The opposition Social Democrats (SPÖ), a former coalition ally of Mr Kurz’s party, blamed the chancellor for his ousting and said bringing populists into power had proven a “staggering failure”.

It remains unclear what new administration will emerge in September, with even the scandal-tainted FPÖ retaining its core vote of 18 per cent on Sunday.

“We are in a highly emotional phase in Austrian domestic politics, and this emotion is difficult to steer in the public debate,” said Thomas Hofer, a political analyst, on Austrian radio.

Across the border in Germany, emotions are running high in the ruling CDU after its 28.9 per cent EU election result, a new low in a nationwide election.

The party of Helmut Kohl, and a dominant player in German and European unity, lost voters in every direction.

“This does not meet my standards as head of the party,” said Annegret Kramp-Karrenbauer, six months in the job, after her first electoral outing as CDU leader.

She admitted her party looks defensive on climate change which, combined with a perceived rightward shift on her watch, left the party unattractive to younger voters. Complicating the party’s efforts at strategic and political renewal is her job-share with Dr Merkel.

This weekend the two women, meeting party grandees in a closed-door retreat, will seek to dampen speculation over whether their power share can continue as scheduled to 2021.

The decision may yet be taken out of their hands by their luckless junior coalition partner, the Social Democratic Party (SPD).

On Sunday it finished the EU election in third place, followed by a state poll disaster in the one-time stronghold state of Bremen.

A swing to the Greens left the SPD promising to press harder on climate and digital policy in the Berlin grand coalition. SPD leader Andrea Nahles said: “I sense the responsibility I have. Everyone is aware of the seriousness of the situation.”

Rising star and left-winger Kevin Kühnert said solving his party’s existential crisis didn’t lie in a new leader, its sixth in 10 years, but in answering the existential question: “What kind of party do we want to be?”