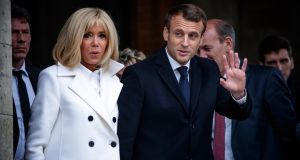 On Monday night, over a hastily convened dinner in Paris, the French and Spanish leaders, Emmanuel Macron and Pedro Sánchez, plotted how they would face up to their 26 colleagues on Tuesday night in Brussels.

At stake is the presidency of the European Commission, and a demand by the newly elected European Parliament that the commission should submit to its will in making its choice: the European People’s Party leader in parliament, Manfred Weber.

Macron, in this first trial of strength with the new MEPs, is not inclined to do so – he has never favoured the spitzenkandidat system, or preferred candidate, and he will have been seeking to enlist the Spaniard to his cause. Sánchez has his own candidate, a former president of the parliament, Josep Borrell.

The final act of this election drama should play out on Tuesday night, as one Irish official put it, “the coup de grace”, to let an expectant Weber down as gently as possible.

The other big challenge of the elections has largely been seen off – stemming the relentless rise of the populist Eurosceptic right and its self-proclaimed “illiberal”allies. Was it perhaps fear of that rise which drove up turnout to 50.95 per cent, the highest in 20 years?

Some of them did well. Not least their cheerleader, Italy’s deputy PM and leader of the anti-immigrant Lega, Matteo Salvini, who managed to substantially outdistance his coalition partner, the Five Star Movement, and pulled in 34 per cent of the vote.

The authoritarian governments of Hungary and Poland both won strong endorsements from their electorates – Poland’s looming general election looks likely to be difficult for the liberal opposition.

In the UK, Nigel Farage’s Brexit Party won a remarkable 32 per cent of the vote, but a large part of that was the 27 per cent who voted for Ukip in 2014, beefed up by disgusted Tory voters. The party is unlikely to be able to replicate that in a general election, and will anyway be leaving the European Parliament, with its 29 seats, as soon as Brexit happens.

Voters in Romania also struck a blow for the rule of law in a non-binding referendum in which they overwhelmingly voted No to allowing their PSD government to offer pardons and amnesty in corruption cases.

President Klaus Iohannis, at constant loggerheads with the country’s government, which has repeatedly clashed with the EU over lax attitudes to corruption, applauded his country’s voters: “Thank you Romanians. This is a clear vote for correct politics, for true justice.”

The three current Eurosceptic groups in the parliament have 172 seats, an advance on the 151 they had last time mainly because of the arrival of 22 MEPs from Italy’s Lega. Overall the populists’ finish isn’t that much stronger than in 2014.

The real victors of the election were the Greens – now with 69 MEPs – after doubling their vote in Germany and finishing second in Finland. The party came third in France and Luxembourg, performed strongly in Belgium and the Netherlands, and won back its old European Parliament seats in Ireland 20 years on.

The Greens, with the 101-strong expanded Liberals, in a group to which Macron has allied himself, and now calls itself temporarily “ALDE+ Renaissance +URS”, are now indispensable to any parliamentary majority.

The new parliament reflects the steady erosion of the main blocks that have dominated it for years. Between them the Socialists – expected to have 147 seats – and the EPP (182) have lost some 40 seats.

New majorities in the 751-strong chamber of at least three parties will be necessary to pass major legislative dossiers, but most importantly to agree the candidate – spitzenkandidat – whom parliament expects EU leaders to name as commission president.

The EPP, the Socialists and Liberals together have a clear majority, probably of 438 seats, and the EPP as the largest party assumes that the other two will rally behind their man, Weber . The Socialist candidate, commissioner Frans Timmermans, could perhaps muster just 360 with the backing of the four parties of the left and centre – not enough, however.

But some of the EU leaders are strongly opposed to the spitzenkandidat system and what they regard as the usurpation by MEPs of their treaty prerogative. Enough perhaps to form a blocking minority. Their alternative candidate, however, is not clear.

Would Germany’s Angela Merkel give up a German candidate for a French one like chief Brexit negotiator Michel Barnier? Or could others stomach a non-EPP name – there are, after all, only nine EPP leaders among the 29? Or indeed a woman like Liberal Danish commissioner Margrethe Vestager? How about one of their own number, say Belgium’s Charles Michel?  A safe pair of hands, albeit a Liberal.

Much depends on the broader calculation about how the other top jobs will be allocated, a complex negotiation that will probably mean Tuesday night’s dinner in Brussels can only start the process.

In truth there has been much at stake in these European elections. They were not the usual political sideshow, the “second order” elections that political scientists describe them as. Bitter, hard fought. Their verdict matters more than ever, as Alexis Tsipras demonstrated in finding himself forced to call a Greek general election in response to a sharp fall in his support.

Perhaps at last they mark the coming of age of a real pan-European democracy.