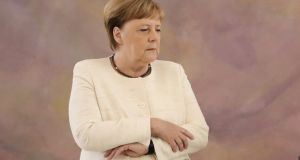 German chancellor Angela Merkel was seen shaking at a public ceremony on Thursday, the second time this month, prompting assurances from her spokesman that she remains in good health.

Dr Merkel later departed as planned for Osaka, Japan, where she is due to take part in the G20 meeting of global leaders. She is expected to have one-on-one meetings with Russian leader Vladimir Putin and US president Donald Trump, among others.

The bout of shaking took place at Bellevue Palace, the Berlin residence of Germany’s federal president, during the swearing-in ceremony of Christine Lambrecht, the new justice minister.

Video footage showed Dr Merkel starting to tremble as she stood next to President Frank-Walter Steinmeier. She clasped her arms to control the shaking, but rejected a glass of water offered to her by an official.

The shaking, which subsided as soon as she started to move, lasted almost two minutes.

Concerns over Dr Merkel’s health first surfaced last week when she suffered a similar bout of shaking during an open-air welcoming reception in honour of Volodymyr Zelenskiy, the Ukrainian president. She recovered quickly after drinking several glasses of water, suggesting the incident was heat-related.

The only previous occasion during which Dr Merkel was seen to tremble in similar fashion took place during a state visit to Mexico two years ago, again in hot and humid conditions.

The event at Bellevue on Thursday was held indoors, however, on a relatively cool day in the German capital.

Asked whether the incident would affect her travel plans, a spokesman for Dr Merkel said: “Everything is going ahead as planned. The chancellor is doing fine.” Dr Merkel, a keen walker, is not known to suffer any illnesses.

The 64-year-old conservative leader became chancellor in 2005, and went on to win another three general elections. If she sees through her current mandate, which lasts until 2021, she will equal the record set by Helmut Kohl, who held on to the chancellorship for 16 years between 1982 and 1998.

It remains unclear, however, whether Dr Merkel can serve out a full term. She presides over a coalition government between her own Christian Democrats and the Social Democratic party (SPD) that is marked by growing tensions. The SPD is due to decide by the end of this year whether it will continue the alliance, which is deeply unpopular with its rank-and-file members and widely blamed for the party’s weakness in the polls.

Dr Merkel took her first step away from power last year, when she retired as leader of the CDU after 18 years.

Annegret Kramp-Karrenbauer, who took over as party chairman in December 2018, is seen as the frontrunner to succeed Dr Merkel in the chancellery, though a string of gaffes and a notable drop in the polls have recently raised questions over her grip on the party. – Copyright The Financial Times Limited 2019