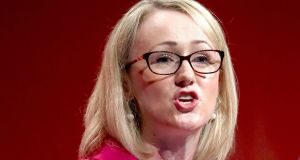 Labour leadership contender Rebecca Long-Bailey is in the lead, according to a new poll. Photograph: Gareth Fuller/PA Wire

The five candidates to succeed Jeremy Corbyn as Labour Party leader have begun seeking the support of unions, other affiliated bodies and constituency parties as the contest enters its second stage.

The leader will be chosen by all Labour members and registered supporters but to appear on the ballot, candidates must have the support of two unions and one other affiliate, making up 5 per cent of the total affiliate membership, or 33 constituency parties.

The other candidates are far behind, with Jess Phillips on 9 per cent, Lisa Nandy on 7 per cent and shadow foreign secretary Emily Thornberry on 1 per cent.

Ms Nandy, who has criticised Mr Corbyn for failing to connect with Labour voters who backed Brexit, said on Wednesday that she would support continued free movement of people after Britain leaves the EU.

“We should have been bold enough to defend free movement, and the opportunities and benefits it brings. But this would have required recognising it has flaws, and not dismissing concerns as simply racist anti-immigrant sentiment,” she told the Royal Society of Arts.

“We should acknowledge that over decades governments have used the steady influx of skilled labour to cover up a lack of investment in skills and training in the UK and address this. I believe in free movement. If it were paired with renewed and radical investment that enabled opportunities for young people, decent jobs, training and skills – then the same concerns would have fallen away.”

Writing in the Guardian, Mr Starmer said that for Labour to win again, it must make the moral case for socialism, continue to oppose austerity and embrace environmentally responsible economic policies.

“I believe the free market economy has failed. It leaves too many people behind, and has fuelled gross inequality. We should be arguing for a new economic model that reduces that inequality, supports trade unions, gives people a real voice in their workplace and enables communities to thrive,” he wrote.

Ms Long-Bailey, who is a close ally of the Labour leadership, is expected to win the support of Unite, the party’s biggest union paymaster, and to win a place on the ballot without difficulty. Mr Starmer, who already has the backing of Unison, Britain’s biggest union, is also expected to qualify for the final round with ease.

Ms Nandy has the support of the National Union of Mineworkers and is well placed to win the backing of the GMB union next week, helping her to secure a place on the ballot. Ms Phillips and Ms Thornberry may need the support of constituency parties to make it through to the final round.