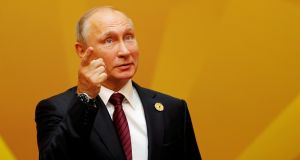 Russian president Vladimir Putin has sought to dampen growing expectations over the possible deployment of international peacekeepers to eastern Ukraine, as Kremlin and US envoys prepare for talks on Monday on the region’s conflict.

“I have not heard anything about this, I do not know anything about this, so it is impossible to comment,” Mr Putin said of a report in the Wall Street Journal that outlined US plans to propose a 20,000-strong peacekeeping force for an area where more than 10,000 people have been killed in fighting since spring 2014.

“A proposal is one thing, but when a proposal is put down on paper it often looks very different,” Mr Putin said on Saturday at the end of the Asia-Pacific Economic Co-operation summit in Vietnam.

“But if there will be such proposals, let’s see,” he added.

The chief Russian envoy for the Ukrainian conflict, Vladislav Surkov, and his US counterpart Kurt Volker are due to meet in the Serbian capital, Belgrade, on Monday for their third round of talks in recent months.

Having rejected Kiev’s earlier calls for a peacekeeping mission, Mr Putin said in September that such a force could be deployed to protect international monitors in eastern Ukraine along the so-called “line of contact” between government troops and separatist fighters who are armed and ultimately controlled by Moscow.

Kiev and Mr Volker criticised that proposal as too limited. They want the peacekeepers’ mandate to cover all separatist-held areas, including stretches of the Ukraine-Russia border through which the militants receive supplies from Moscow.

Mr Volker said this month that if Russia decided to “dig in” and prolong a low-level conflict in Ukraine, it would face continued US economic sanctions and the rising cost of propping up separatist-held areas of the Donetsk and Luhansk regions.

“Alternatively, if they want to get out, there are ways to do that. And that’s what exploring a peacekeeping force and a peacekeeping option can entail, and we would be happy to help,” he said during a state department briefing.

Mr Volker also flatly rejected the Kremlin narrative of “civil war” in Ukraine and Mr Putin’s calls for the government in Kiev to negotiate with local warlords.

“It is one where on the eastern side you have 100 per cent Russian command and control of what’s happening there . . . this is Russian-directed, and so the relevant interlocutor here is Russia.”

Ukrainian foreign minister Pavlo Klimkin said on Saturday that Kiev had drawn up its own draft UN resolution on a peacekeeping mission in close consultation with the US, Germany, France and the UK.

“As regards the meeting on Monday [in Belgrade], I’m likely to be very cautious about it, if not sceptical. I spoke to Kurt [Volker] a few hours ago, and we agreed the main parameters of our position,” he said.

The talks may also touch upon the possible supply by the US of lethal “defensive” weapons to Ukraine, which Mr Volker said Washington was “actively considering”.