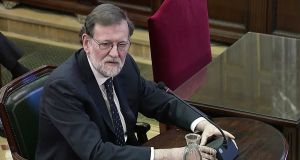 Spain’s former prime minister Mariano Rajoy defended his handling of the Catalan territorial crisis when he appeared before the country’s supreme court on Wednesday.

Mr Rajoy, a conservative who was prime minister from 2011 until June of last year, was called as a witness in the trial of 12 Catalan leaders who face charges related to their region’s failed independence bid in 2017.

“Spain is what all Spaniards want it to be and not just some Spaniards,” Mr Rajoy told the court.

He added that Catalan independence leaders “fully understood that with Mariano Rajoy as prime minister, our national sovereignty would never be destroyed.”

The dozen defendants are nine former members of the Catalan government, the former speaker of the region’s parliament and two former leaders of rank-and-file pro-independence organisations. They face charges that range from misuse of public funds to sedition and rebellion.

Much of the day’s questioning, by both plaintiffs and lawyers representing the defendants, focused on the events of October 1st, 2017, when the Catalan regional government organised a referendum on independence in defiance of the Spanish judiciary.

Both Mr Rajoy and Ms Santamaría insisted that a referendum had not in fact taken place in any official sense on that day and they each referred to a Spanish electoral board ruling to back up their assertion. They also both accused pro-independence activists of using systematic violence during the autumn of 2017. In addition, Ms Santamaría said that those taking part in the referendum had used “human shields” to keep police away from voting stations.

The independence movement rejects such claims and says that the Spanish state used violent methods in an effort to thwart the referendum. One of the defence lawyers showed Mr Rajoy a video of Spanish police beating Catalan voters on October 1st, 2017 and asked him if he had been aware that such footage existed.

“I have seen a lot of images like these throughout my life,” Mr Rajoy answered. “What I’d like to say is that the responsibility of political leaders lies in avoiding these kinds of developments. If the law had been obeyed we would not have witnessed this.”

There are three plaintiffs in the case – the public prosecutor, the state lawyer’s office and the far-right political party Vox – all of which questioned Mr Rajoy. He and Ms Santamaría were quizzed about their decision to introduce direct rule in Catalonia several weeks after the referendum, following a declaration of independence by the region’s parliament. The former prime minister said he had chosen that moment to use the measure having considered the legal implications and deeming it “prudent” to do so. Ms Santamaría told the court that direct rule was implemented because the independence declaration was “not symbolic”.

Previously, several defendants had suggested the contrary. Last week, former Catalan business minister Santi Vila told the court that the referendum had been intended as an attempt to pressure the Spanish authorities into negotiating, rather than being a binding vote.

Before Mr Rajoy’s appearance on Wednesday, Mr Mas had criticised the Spanish state’s use of force to stop the referendum.

“Why would they do something in such an unintelligent way that would go all around the world?” he said.

Mr Mas also said he had advised his successor as Catalan president, Carles Puigdemont, to consider calling a regional election as an alternative to the independence declaration.

On Thursday, Basque president Íñigo Urkullu will be among those called to testify. In 2017, Mr Urkullu unsuccessfully attempted to mediate between the Catalan and Spanish governments.