‘It is important to unite scientific capabilities, to discover vaccines and treatments’ 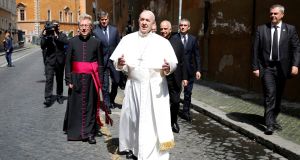 Pope Francis called for co-operation across the world to deal with the crisis. Photograph: Reuters

Pope Francis called on Sunday for international scientific cooperation to discover a vaccine for the coronavirus and said any successful vaccine should be made available around the world.

The pope, who has been delivering his Sunday address from the papal library instead of St Peter’s Square because of the lockdown in Italy, thanked all those globally who are providing essential services.

He encouraged international co-operation to deal with the crisis and combat the virus, which has infected nearly 3.5 million people and killed more than 240,000 people worldwide.

“In fact, it is important to unite scientific capabilities, in a transparent and impartial way to find vaccines and treatments,” he said.

The pontiff said it was also important to “guarantee universal access to essential technologies that allow each infected person, in every part of the world, to receive the necessary medical treatment”.

World leaders pledged in April to accelerate work on tests, drugs and vaccines against Covid-19 and to share them around the globe, but the United States did not take part in the launch of the World Health Organization (WHO) initiative.

US president Donald Trump has said the WHO was slow to react to the outbreak and was being “China-centric”, and as a consequence has announced a suspension of funding. The WHO has defended its handling of the crisis.

What will Trump do?

A number of pharmaceutical companies around the world have developed tests to identify antibodies that develop after somebody has come into contact with the virus.

The Trump administration is planning to speed up development of a coronavirus vaccine with the goal of having 100 million doses ready by the end of 2020, according to a senior US administration official.

Most experts have suggested clinical trials to guarantee a vaccine is safe and effective could take a minimum of 12 to 18 months.

On Sunday, the pope also backed a proposal by an inter-religious group known as the Higher Committee on Human Fraternity for an international day of prayer and fasting on May 14th to ask God to help humanity overcome the pandemic. – Reuters