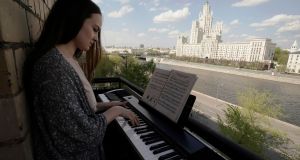 Russia’s coronavirus outbreak is likely to be far larger than government data suggest, Moscow’s mayor has warned, as a surge in confirmed cases makes the country the world’s seventh most affected.

The government said the official number of Covid-19 cases jumped by more than 10,000 on Sunday, a record daily increase and the largest outside the US. The figure underscores warnings from the Kremlin that the pandemic will continue to spread until at least mid-May.

Sergei Sobyanin, Moscow’s mayor, said on Saturday that a survey using improved testing methods suggested 2 per cent of the capital’s citizens were infected with coronavirus, equal to more than 250,000 people, or four times the number of officially confirmed cases in the city.

“It is obvious that the threat is still growing,” Mr Sobyanin said on his personal website. “Once again I appeal to you, dear Muscovites, with a request to treat self-isolation measures as responsibly as possible.”

Russia on Sunday said almost 135,000 coronavirus cases had been recorded nationwide and close to 1,300 people had died of the virus. That lifts Russia above Turkey in the list of worst-affected countries, according to Johns Hopkins University data.

While Russia reported far fewer cases of coronavirus in February and early March as the number of infections surged in other European countries, it has struggled to contain the outbreak over the past six weeks, with cases recorded across its vast territory.

Unlike the European countries with more confirmed cases – Germany, Spain, France, Italy and the UK – the number of new cases recorded each day is still rising.

President Vladimir Putin last week warned Russians in a national address that “the most intense stage in the fight against the epidemic” was still ahead.

Mr Putin on Thursday appointed a temporary replacement for prime minister Mikhail Mishustin after he said he had contracted the virus.

The head of Rospotrebnadzor, Russia’s health watchdog, on Sunday said a national lockdown in place since late March could be extended beyond mid-May if citizens violated the rules during the annual May holidays that began this weekend.

“Everything is possible . . . we can still sit for a long time, until June, at least,” Anna Popova told state-run television. “The restrictions can be lifted by assessing the epidemic situation. If people start to violate them today, then by May 12th it will be obvious that we need to strengthen them.”

Extending the lockdown would heap even more pressure on Russia’s crisis-wracked economy. Hit by both a collapse in global and domestic demand and the fall in oil prices – its key export – the central bank expects gross domestic product to fall by as much as 6 per cent this year.

The rise in confirmed cases in provincial cities and rural areas outside Moscow was also a concern and would probably mean a multi-tiered lifting of restrictions, Mr Putin warned this week.

“The spread of the disease outside the key cities is an important signpost to watch,” said Andrius Tursa, an analyst at Teneo, a political risk consultancy. “Russia’s remote regions tend to have older populations, lower economic resilience to shocks and limited healthcare capacity to handle the outbreak.” – Copyright The Financial Times Limited 2020