Thousands of worshippers greeted Pope Francis from the esplanade of the Fatima sanctuary, Portugal, on Friday (May 12). He will make saints of two Portuguese shepherd children who are believed to have seen apparitions of the Madonna 100 years ago. 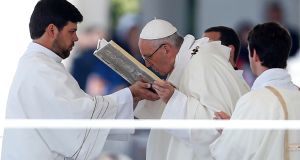 Pope Francis kisses the book of the gospels as he leads the Holy Mass at the Shrine of Our Lady of Fatima in Portugal. Photograph: Rafael Marchante/Reuters 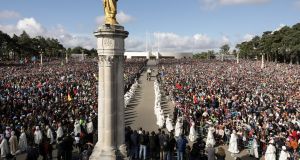 A statue of Our Lady of Fatima is carried through a crowd of devotees to the traditional annual pilgrimage to the Fatima Sanctuary on Saturday. Photograph: Paulo Novais/EPA 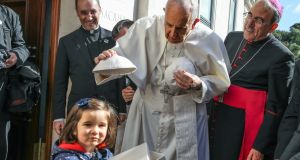 Pope Francis (C) accompanied by Leiria-Fatima Bishop Antonio Marto (R) changes skull-caps with a young child at the entrance of the Our Lady Rosario Cathedral at the Fatima Sanctuary. Photograph: Paulo Cunha/ EPA

Pope Francis has added two Portuguese shepherd children to the roster of Catholic saints at an open air Mass in Fatima.

The young siblings’ visions of the Virgin Mary 100 years ago turned the sleepy farm town into one of the world’s most important Catholic shrines.

Francis proclaimed Francisco and Jacinta Marto saints at the start of Mass on Saturday marking the centenary of their visions.

Hundreds of thousands of pilgrims were on hand, many of whom had spent days at Fatima in quiet prayer, reciting rosaries before a statue of the Madonna.

They clapped in admiration after the pope recited the rite declaring the Martos saints.

The siblings and their cousin, Lucia, reported that on March 13th, 1917 the Virgin Mary appeared to them while they grazed their sheep.

They said she confided in them three secrets — foretelling apocalyptic visions of hell, war, communism and the death of a pope — and urged them to pray for peace and a conversion away from sin.