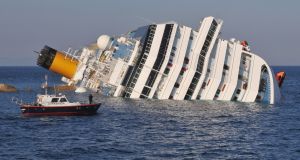 The former captain of the Costa Concordia cruise liner was sentenced to 16 years in prison on Friday by Italy’s highest court for his role in the vessel’s 2012 shipwreck, which killed 32 people off the Tuscan island of Giglio.

Francesco Schettino was originally found guilty in 2015 of manslaughter, causing a shipwreck and abandoning his passengers.

Friday’s ruling marked the end of the Italian appeals process, with the court upholding the initial verdict.

Schettino (56) reported to a Rome prison to start his sentence as soon as he was told of the verdict, his lawyer, Saverio Senese, said.

“As always, Italy needs to find a scapegoat,” Mr Senese told reporters, adding that his client had waited for word of his fate alone outside the prison gates rather than stay at home with his family.

Schettino has always maintained that he was not solely responsible for the disaster.

His lawyer said he might appeal the ruling to the European Court of Human Rights. “I think there have been serious abuses here,” he said. “I never give up.”

The Costa Concordia was carrying more than 4,200 passengers and crew when it hit rocks off Giglio, tearing a hole in its side and eventually keeling over.

Schettino was lambasted by the Italian media and branded “Captain Coward” for leaving the stricken ship while a chaotic night-time rescue operation was in full flow.

Critics accused him of bringing shame to the whole country through his actions.