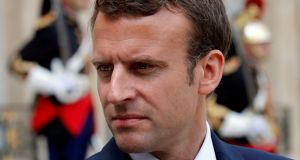 Emmanuel Macron: support for the president has amplified since the first round of the presidential election on April 23rd, while his opponents have lost much ground. Photograph: Philippe Wojazer/Reuters

President Emmanuel Macron’s new movement, La République En Marche (LREM), is poised to win an absolute majority in legislative elections that will take place in two rounds – this Sunday and the following Sunday.

The LREM tsunami is expected to give Macron, who was elected on May 7th, between 350 and 400 of 577 deputies in the National Assembly, the largest majority in 15 years and possibly in a century, analysts from three leading polling companies told the Anglo-American Press Association.

There are 7,880 candidates, an average of 14 per constituency. All candidates who receive 12.5 per cent of ballots cast by registered voters will go on to the second round.

Predicting results accurately is an exercise in “politology”, said Edouard Lecerf of Kantar Public Sofres, cautioning that polls can provide only broad estimates of the composition of the future assembly.

Some experts nonetheless predict a chambre bleue for Macron. The term is a historic reference to the huge conservative majority elected in 1919, named for the sky blue uniforms of French soldiers in the first World War. It means an assembly with no organised opposition.

Because legislative elections follow directly after the choice of a president, the composition of the assembly usually resembles the results of the first round of the presidential poll.

But support for Macron has amplified since the first round of the presidential election on April 23rd, while his opponents have lost considerable ground. Pollsters predict other parties will be left only “crumbs” in the assembly.

Macron’s LREM has gained seven percentage points over his first round score, while support for the extreme right-wing Front National (FN) has fallen three points below the first round score of its leader, Marine Le Pen.

“En Marche is a fragmentation bomb,” Lecerf says. “It exploded first in the presidential election. Now it’s going to do a lot more damage in the legislatives. Little explosions will continue to resound throughout French politics.”

The new party is fielding only 524 candidates, half of them male, half female. Ninety per cent of LREM candidates are from the most favoured socio-professional categories, or own businesses. Wherever LREM candidates make it to the second round, they are favoured to win.

The attraction of LREM is so great that numerous candidates who did not receive its endorsement have removed all mention of their party of origin from campaign posters and tracts. Some of these LREM imposters photo-shop photographs of themselves with Macron, or splash the words “presidential majority” across their posters.

In an ordinary legislative election, about 20 per cent of the assembly are first-time deputies, the political scientist Dominque Reynié of the Fondapol think tank said. This time, “we could see up to 70 per cent of parliamentarians who have never served before”.

Yet France’s Macronmania masks a deeper fragility, Reynié cautions. “Nearly 57 per cent chose Marine Le Pen or voted blank or abstained on May 7th . . . If other parties are marginalised in the National Assembly and the trade unions are in crisis, opposition will express itself elsewhere, in the streets, for example.”

The upheaval unleashed by Macron “is a great leap into the unknown that will take some time to settle”, says Bruno Jeanbart of OpinionWay polling company.

“En Marche is an aggregate of very diverse voters from socialist, centrist and conservative parties,” notes Jérôme Fourquet of the Ifop polling agency. “It’s blurry on the issues . . . It will get complicated when those from the right think labour reform doesn’t go far enough and those from the left say it’s too hard on employees.”

Put more brutally by the right-wing MEP and mayor of Paris’s 7th district, Rachida Dati, LREM is “a party with no backbone, a club for Macron supporters”.

The lack of political experience extends to Macron’s cabinet, where only four ministers served in previous governments and the Élysée chose most top advisers. “I’ve never seen such a ‘presidentialised’ government,” says Reynié. “Macron is the first hyperpresident.”

“The French were frustrated by the feeling their country was no longer a great power,” Lecerf says. “Macron has played on that. He used the term ‘Jupiterian presidency’. What he has done in France is resounding elsewhere in Europe. He could reconfigure European politics too . . . He is becoming a reference for young politicians. Everyone will want to be the new Macron.”

Macron has succeeded in dividing the conservative Les Républicains (LR) between those who are “Macron compatible” and hardliners. “We have an army of soldiers but the (LR) generals want to collaborate,” Dati says scathingly.

LR is expected to trail far behind Macron’s party, with between 70 and 130 seats, followed by Jean-Luc Mélenchon’s France Unbowed, with 20-35 seats. Le Pen’s FN will perform poorly, with 5-15 seats.

The election will be most devastating for the outgoing socialist majority, who could salvage as few as 15 seats, at best 30.