Former director of the FBI accuses the Trump administration of defamation during his testimony to the US senate intelligence committee. Video: C-Span 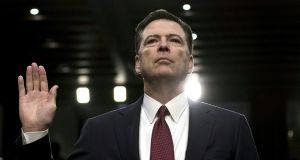 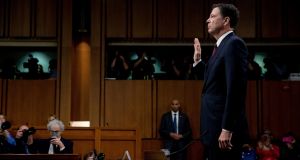 Former FBI director James Comey accused US president Donald Trump of spreading “lies” about him and the organisation he formerly headed, as he launched a scathing attack on the US president in testimony to the Senate Intelligence Committee on Thursday.

Mr Comey, who was fired by Mr Trump on May 9th, said that his administration “chose to defame me and more importantly the FBI by saying that the organisation was in disarray, that it was poorly led. These were lies plain and simple.”

Mr Trump’s behaviour had compelled him to keep notes of their conversations, he said. “I was honestly concerned he might lie about our meeting,” he said.

“I knew that there might come a day when I would need a record of what had happened, not just to defend myself, but to defend the FBI and our integrity as an institution and the independence of our investigative function,” he said.

Under questioning by the bipartisan committee – one of four congressional committees examining Russian interference in the 2016 presidential election – Mr Comey said he believed that his handling of the Russian investigation was the reason he was fired by Mr Trump.

“I know I was fired because something about the way I was conducting the Russia investigation was in some way putting pressure on him, in some way irritating him, and he decided to fire me because of that,” he said.

The Trump administration initially claimed that the reason Mr Comey was fired was because of his handling of the Hillary Clinton email server scandal, but the US president later said in an interview with NBC that it was also connected to “this Russian thing”.

Mr Comey repeated his assertion in written testimony submitted to the committee on Wednesday that Mr Trump had asked him to “let go” of the investigation into former national security adviser Mike Flynn during a meeting in the Oval office on February 14th after asking other people present to leave the room. However, the 56 year-old former intelligence official declined to say if he believed this amounted to an obstruction of justice. Instead, that was a matter for special counsel Robert Mueller he said.

He did say that he hoped there were tapes of the recording, as suggested by Mr Trump. “Lordy, I hope there are tapes,” he told the committee.

He also clarified, under questioning by Republican senator Richard Burr, that the president never asked him to stop the broader FBI investigation into Russian involvement in the 2016 election.

Mr Comey was also pressed, but declined to comment, on other connected issues relating to the Russian investigation during the two-and-a-half hour hearing.

Similarly, he would not be drawn on further details about the FBI investigation into former national security adviser Mike Flynn, save to say it was a “criminal” investigation.

He did confirm a report earlier this week that he had said to attorney general Jeff Sessions that he was not comfortable being alone with the president.

Speaking after the hearing senators from both sides of the political aisle welcomed Mr Comey’s testimony.

Senator Richard Burr, the Republican chairman of the committee, said that Mr Comey’s testimony had helped “clarify” factual issues and said that the work of the committee was not over and it would continue gathering evidence.

While most Republican senators said that the testimony had not proved that the president’s actions could be seen as obstruction of justice, Senator Marco Rubio said he had still not reached a conclusion because all the facts had not been ascertained.