Political rival of Lukashenko jailed over protest near Minsk 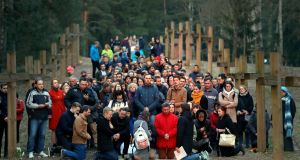 Locals pray next to the line of wooden crosses marking the Soviet-era mass grave site in Kuropaty, close to the Belarus capital of Minsk. Photograph: Sergei Grits/AP

A court in Belarus jailed a prominent opposition leader on Tuesday for organising a protest against the demolition of a memorial to victims of Josef Stalin’s repressions.

Mikalai Statkevich, the chairman of the Belarus Social Democratic Party, will serve 15 days in prison for calling his supporters to a meeting to pray for “deliverance from evil” after the authorities removed crosses from the site of a mass Soviet-era grave in woodlands outside Minsk, the capital.

Soviet secret police murdered tens of thousands of people in the Kurapaty woods in clandestine executions during Stalin’s Great Terror in the 1930s and early 1940s. Discovered more than four decades later, the site has become a place of pilgrimage where Belarussians go to pray and remember their ancestors.

Alexander Lukashenko, the authoritarian president of Belarus, ordered officials to bring order to Kurapaty in early March, saying the place had become politicised. Public calls for the removal of a restaurant built by a private investor in 2017 at the site were unwarranted, Mr Lukashenko said, adding he would be happy to drink tea or a glass of vodka there.

Last Thursday, the authorities moved bulldozers into Kurapaty, tearing down at least 70 tall wooden crosses and carrying their remains away. Police cordoned off the site during the operation to keep protesters at bay. Local media reported that 15 civil society activists were detained.

Belarus’s ministry of forestry said the demolition was part of an effort to beautify the Kurapaty woods and that only crosses that had been illegally installed by activists on the periphery of the memorial had been removed.

However, the violent bulldozing shocked many Belarussians and sparked a wave of angry comment on social media. Religious Christian Orthodox and Catholic leaders condemned the action as an outrageous sacrilege, all the worse for happening in the holy weeks leading up to Easter.

Sviatlana Alekseyevich, a Nobel Prize-winning Belarussian author, said the authorities were trying to erase memories of the Stalin-era repressions and mould a historical narrative for their own political ends. Mr Lukashenko had “only one religion – power”, she told the Belarus news site TUT.by.

Police arrested Mr Statkevich as he prepared to lead a protest against the demolition of Kuropaty outside a cathedral in Minsk on Sunday. A veteran opposition leader, he had hoped to bypass draconian restrictions on public meetings by casting the event as a prayer meeting to beg for God’s forgiveness for the attack on the crosses.

Mr Statkevich stood in the 2010 presidential election in which Mr Lukashenko, who has been in power since 1993, won a fourth term in office. He was jailed shortly afterwards for five years for organising riots – charges his supporters said were trumped up to remove him from the political arena. Last month, the Social Democratic Party nominated Mr Statkevich to compete again for the presidency at the next poll in 2020.