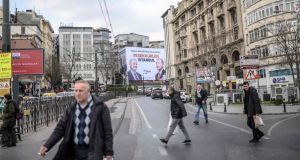 Three women wave sticks with miniatures of their national flag. The crescent moon on its red backdrop flutters. Behind them, a line leads to a discoloured kiosk. Inside, two men pour black tea into dozens of paper cups. A cig hangs from the mouth of one as he wields a large, worn teapot and lubricates the political process with free hot beverages. An adjacent exotic tent offers a place to sip the boiling brew in comfort as a sharp, sun-drenched coldness whips in from the Bosporus Strait.

Huge billboard photos of the AKP’s Recep Tayyip Erdogan and Hilmi Turkmen and other politicians proclaim the dominant force. Colour-print mayoral election banners are emblazoned with the cult of these personalities, but the status quo’s grip is about to slip in mayoral elections all over Turkey a few days later.

Uskudar is on the Asian side of this straits-and-sea-straddling city of more than 15 million people. A short walk from the seafront’s electioneering mayhem and amped-up Turkish pop music, a fisherman’s market offers mackerel with their red-flesh fins turned outwards in a display of extreme freshness. What you see is what you get. Locals toddle along. Trade is slow. A vendor stands at the epicentre of the market, where various alleyways intersect. He sells leather belts from the top of a box. A weary garter around his extensive waist suggests he may be his own worst customer.

Turkey’s economy is caught in a nosedive. Several quarters of shrinking growth dropped it into technical recession at the end of 2018. The lira has weakened against the dollar and euro, and has forced up the cost of imports. Unemployment has reached 13.5 per cent. Inflation has soared to about 20 per cent. Times are tough, and tough times trigger calls for change.

Passenger, cargo and fishing vessels navigate along prescribed routes as the Bosporus Strait bleeds into the Sea of Marmara. Look out there and you see an economy kept afloat on Turkey’s coastal second city: these ships are nautical indicators of trade and commerce. A deep crowd close to the Galata bridge jostles at a counter for hot fish sandwiches. Cooks marshal hundreds of filleted oily fish through the fast stages of grilling. Pickle juice in plastic beakers washes down the repast. Later in the evening under the blue glow of the Galata tower, scores of men cast hooks from the bridge out into the dark. Dopey fish take the bait and are reeled up on to the parapet.

A mosque by the edge of the Grand Bazaar overflows with Friday faithful. Men outside squint against light rays as they devoutly face towards Mecca. The next day brings out a compact mass of consumers. Clothes, pots, pans, food, spices, fish, vine leaves, underwear, socks, shoes and garden implements are a small subset of what’s on sale in the market’s back streets.

In dense human traffic, people surge imperceptibly. Now stagnant. Now flowing. Each person is a pixel of market demand, an individual with their own shopping needs. This is the lively, raw trade of fixed prices and haggling. These are the molecules ultimately aggregated into lines of a macroeconomic graph: these are the muscular human faces behind demand meeting supply. And the votes behind political change. In both domains, the goal is always the best deal.

Erdogan became mayor of Istanbul in 1994. In less than a decade, he worked his way up to the position of president. Since then he has shifted the tone of the country away from its famously secular nature and propagated a conservative ideology. Just under three years ago, he survived an attempted coup and instigated a clampdown on intellectual dissent.

As the domestic economy unravels across a range of clear indicators, he has pointed the finger at external cultural and political forces. He sought to leverage the mosque shootings in New Zealand by blaming the West. He also claimed efforts are afoot to sabotage the Turkish economy. Other externalised threats include Fethullah Gulen, the US-based cleric who Erdogan sees as responsible for the 2016 failed coup. Now Erdogan is questioning Ekrem Imamoglu’s narrow victory as the latest mayor of Istanbul.

A conflux of pathways at the back of the Egyptian bazaar creates a crossroads. An intersection of four lines of people. A heaving mass caught in human market gridlock. Crowd panic would spark a stampede. But ancient safety and wisdom have dealt with this before. Three low burka-wearing women bore their way ahead, effective and laughing cannonballs of navigatio, they continue on their path, as they eventually get where they want to go.