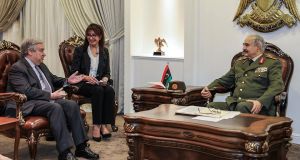 Dozens of migrants and refugees in a Tripoli detention centre were dressed in old military uniforms and ordered to begin packing weapons this week, as rival forces began to march on the Libyan capital.

On Thursday, Gen Khalifa Haftar in Benghazi ordered his self-styled Libyan National Army (LNA) to advance on Tripoli. “We are coming Tripoli, we are coming,” he said in a released audio recording.

On the same day LNA forces took Gharyan, about 80km south of the capital, after fighting with forces who are allied to Tripoli-based Fayez al-Serraj, the prime minister of the United Nations-backed Government of National Accord.

In the Tripoli detention centre, some of the thousands of refugees and migrants who are locked up indefinitely, after being returned to Libya by the EU-backed Libyan coastguard, worried that they may be forced to fight.

“We loaded weapons and later we will load again. Some soldiers left with the weapons and some are here with us. If we tell them to take us back to our room they will not accept it,” one migrant detainee told The Irish Times through via the WhatsApp messaging service.

“There are many types of weapons, eg RPG, big green rockets, bombs. . . There are some weapons that I don’t know their names. And there are cars with big guns,” he said.

The man, who cannot be named because of the risk to his safety, also sent recordings where explosions could be heard in the background, and photographs of the military uniforms given to detainees.

Gen Haftar ordered his advance while United Nations secretary general António Guterres was visiting the country. “I reiterate that there is no military solution for the Libyan crisis, only a political one,” Mr Guterres said on Twitter.

Mr Guterres, who flew to meet Gen Haftar on Friday, had also visited a Tripoli migrant detention centre, saying he was “deeply shocked” by what he saw there.

“No one can argue that Libya is a safe port of disembarkation at this point. These migrants and refugees are not only Libya’s responsibility, they are the responsibility of the whole international community,” he said.

After the meeting with Gen Haftar, Mr Guterres tweeted “I leave Libya with a heavy heart and deeply concerned. I still hope it is possible to avoid a bloody confrontation in and around Tripoli”.

Germany called an emergency meeting of the UN Security Council to discuss the escalation.

In another migrant detention centre, the Abu Salim site in southern Tripoli, hundreds of detainees worried they would be again abandoned without food and water, as happened in August and September last year, the last time there was a serious conflict in the city.

“The war is started,” messaged an Eritrean refugee through WhatsApp. “We hear heavy weapons from far. And we hear some sounds of guns near our compound.”

“We have many kids and pregnant [women] and we have newborn babies, that’s why we’re afraid,” he said.

In a third detention centre, detainees said Libyan guards had been preparing to fight for the past week, rushing around and stockpiling guns in preparation.

Some 5,700 refugees and migrants are currently locked in detention centres run by the Libyan Department for Combatting Illegal Migration, including more than 600 children, according to the UN.

Libya has been divided between warring militias since the 2011 revolt that led to longtime ruler Muammar Gadafy being deposed and killed.