Brexit: May and Merkel find ‘good reasons’ to talk in Berlin 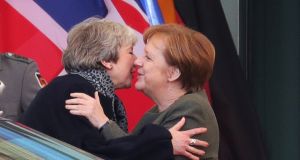 With amusement, impatience, and a nod to the surreal repetition of “Groundhog Day”, British prime minister Theresa May met chancellor Angela Merkel in Berlin for another round of Brexit talks on Tuesday.

Locked in her car on a previous visit, this time Mrs May arrived three minutes early – before the German leader was there to greet her for talks on delaying Brexit yet again.

Dragging her visitor outside again for a photo opportunity, Dr Merkel offered a smile and no press conference before marching her guest inside.

Outside, German officials worked to battle deja vu of British political spin: that Dr Merkel was open to a time-limited backstop for the Irish border and to reopening the withdrawal agreement.

Such claims had “no basis in fact”, Berlin officials said – as little fact, in fact, as when they were floated by British sources before Mrs May’s last visit.

Ahead of Wednesday’s emergency EU summit, Dr Merkel’s spokesman said there were “always good reasons” to talk “in such difficult and highly charged situations in Britain and the EU 27”.

According to British media, Mrs May explained to the German leader her progress in talks with the Labour Party and made her case for an extension until June 30th.

The German leader has not let her preference be known, though Berlin officials indicate a greater openness to an extension of the Brexit deadline than France.

Some Berlin voices suggest the Merkel administration favours a short extension until May 22nd – two days before the European parliamentary elections.

Mrs May left Berlin on Wednesday afternoon for talks in Paris with French president Emmanuel Macron, who has aired fears of an endless Brexit making the EU the UK’s “hostage”.

Ahead of the Berlin talks, Dr Merkel’s spokesman stressed the importance for the bloc of 27 member states to speak with one voice.

“Decisiveness and unanimity is essential at the European Council summit of government leaders,” said Steffen Seibert.

Berlin officials said Dr Merkel would keep to herself before the European Council meeting on Wednesdsay whether she favours a June 30th extension, a “flextension” of up to a year – or nothing at all.

The UK had planned to leave the EU on March 29th, pushed back to Friday’s April 12th deadline for a no-deal departure.

Sounding a less conciliatory note, German EU minister Michael Roth noted that conditions set by the European Council to push back Brexit had not been meet.

“That means that the deadline will expire on April 12th,” said Mr Roth, a junior minister, member of the Social Democratic Party (SPD) but, crucially, outside the Merkel inner circle. “Up to now nothing at all has changed. We are of course thinking about an appropriate extension of the deadline and also about a longer extension. They must, however, come with very strict conditions.”

In a drama that German politicians and public see as increasingly divorced from fact and reality, Berlin’s EU minister Michael Roth spoke for many Germans in describing the status quo as a “very, very frustrating situation”.