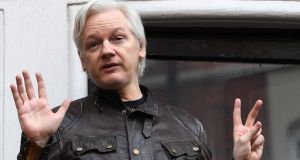 Wikileaks founder Julian Assange has repeatedly denied the allegation against him, made in 2010. Photograph: Neill Hall/EPA

Sweden has halted its rape investigation into WikiLeaks founder Julian Assange for a second time, leaving the Australian facing an extradition hearing from the US.

Swedish prosecutors said on Tuesday they would discontinue their preliminary investigation after concluding that the evidence had become weaker due to the passage of time since the alleged rape took place in August 2010.

Sweden stopped its initial investigation in 2017 due to prosecutors’ claims that they were unable to pursue the investigation while Mr Assange was holed up in the Ecuadoran embassy in London, where he took refuge in 2012. It was restarted in May this year after the WikiLeaks founder was forcibly removed from the embassy and subsequently jailed in the UK for skipping bail.

The discontinuing of the Swedish investigation leaves Mr Assange facing an extradition proceeding in the UK from the US, with the main hearing due to start next February.

Mr Assange faces 18 criminal charges in the US following the leak of thousands of classified documents in 2010 relating to US military activity in Iraq and Afghanistan and could face up to 175 years in prison if convicted.

Eva-Marie Persson, Sweden’s deputy director of public prosecution, said on Tuesday that she found the alleged rape victim’s version of events to be “credible and reliable” and her statements to be “coherent, extensive and detailed”.

However, she added: “It can be confirmed that support for the injured party’s assertion – and therefore of the alleged criminal act – is now deemed to have weakened, largely due to the long period of time that has elapsed since the events in question.”

Swedish prosecutors interviewed seven witnesses, including two new ones, over the summer. But Ms Persson said that interviewing Mr Assange himself was unlikely to “change the evidential situation in any significant manner”.

The investigation had already been handed a blow in June when a Swedish court ruled that Mr Assange need not be extradited to Sweden in order to be questioned by prosecutors, who instead should have interviewed him in prison in the UK.

The decision to discontinue the investigation avoids the British government being forced to decide between competing extradition requests from the US and Sweden.

Mr Assange faced his latest extradition hearing on Monday when his lawyer argued that he was unable to prepare properly for the “very challenging” case due to being given the wrong sort of computer.

His lawyers have previously tried to push back the February hearing to allow more time to investigate claims that the US had “intruded” into conversations between Mr Assange and his lawyers while he was in the Ecuadoran embassy.

Kristinn Hrafnsson, WikiLeaks’ editor-in-chief, said: “Let us now focus on the threat Mr Assange has been warning about for years: the belligerent prosecution of the US and the threat it poses to the First Amendment.” – Copyright The Financial Times Limited 2019