Officers did not use undue force during referendum, witnesses claim 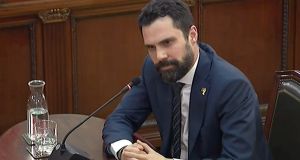 A video-grab of the speaker of the Catalan regional parliament, Roger Torrent, as he testified at the supreme court in Madrid in the so-called “process” trial against 12 Catalan separatists leaders. Photograph: EPA

The police’s handling of an outlawed referendum and the behaviour of pro-independence demonstrators have come under scrutiny during the trial of 12 Catalans accused of leading a failed bid to separate from Spain.

The supreme court trial, which began on February 12th, has so far seen testimonies by a number of key witnesses and all the defendants, who include former members of the Catalan government. They face charges that include sedition and rebellion for their role in the events of autumn 2017.

This week’s witnesses have included former Spanish government officials and a senior police officer. They have all been questioned about how the police handled the independence drive, particularly an outlawed referendum on the issue on October 1st, 2017.

On Monday, José Antonio Nieto, who was secretary of state for security when the referendum took place, appeared to blame the Catalan police force, the Mossos d’Esquadra, for failing to thwart the vote. Mr Nieto told the court that if the Mossos had obeyed a judicial order, “the referendum would not have taken place, I’m convinced it would have been called off”.

The Mossos had been deployed in pairs to ballot stations on the day of the referendum and in most cases they allowed voting to take place. Pro-independence Catalans subsequently hailed their regional force as heroes and the former head of the Mossos, Josep Lluís Trapero, is now awaiting trial for sedition in a separate case.

However, in some polling stations there were violent scenes as officers of the civil guard and national police attacked voters with truncheons.

Both Mr Nieto and former interior minister Juan Ignacio Zoido, who testified last week, have played down the alleged excesses of Spanish officers that day, with the latter describing their actions as “proportionate”.

Meanwhile, Diego Pérez de los Cobos, the civil guard officer who supervised all three forces during the referendum, told the court that there had been no police charges at all.

Pro-independence Catalans have complained that the trial lacks credibility and that accusations of rebellion against nine of the accused make no sense because they imply the use of violence. However, several witnesses in the case have sought to contradict the independence movement’s claim that it only uses peaceful methods.

On Wednesday, Montserrat del Toro, a legal counsel, told the court how she was trapped in a Catalan government building in Barcelona, 10 days before the referendum, as pro-independence demonstrators gathered outside. She had entered the building with civil guards to search it as part of an attempt by the judiciary to block the vote. She eventually left the building via the roof.

Enric Millo, the former Spanish government delegate in Catalonia, also said the independence movement had behaved in a violent fashion. “There were peaceful actions and demonstrations and others in which there was a clear violent component, of aggressiveness, of harassment,” he said.