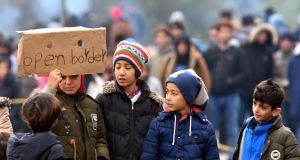 Poland and the Czech Republic are set to join Hungary and Austria in pulling out of a United Nations pact on migration, as populist central European governments attack the deal before it is even signed.

The Global Compact For Safe, Orderly and Regular Migration was agreed in July by all UN members except the United States, and sets out norms for protecting and integrating people who migrate and ways to help them return home.

The pact is non-binding and recognises each state’s right to its own migration policy, but a growing number of anti-immigration leaders in central Europe are now rejecting it ahead of next month’s signing ceremony in Morocco.

“It is very likely that, like Austria, the Czech Republic and the United States, we will not be part of the UN global compact,” Polish prime minister Mateusz Morawiecki said on Friday.

“We believe that here our regulations, our sovereign rules on border protection and migration control are our absolute priority.”

“It’s not clearly interpreted and it could be abused. The United States has pulled out, Hungary too, now Austria, and Poland is debating it as well,” he said.

“I don’t like the fact that it blurs the distinction between legal and illegal migration . . . I will propose to partners in the government that we should do the same as Austria and Hungary,” he added ahead of cabinet talks on the pact next week.

“We view some points of the migration pact very critically, such as the mixing up of seeking protection with labour migration,” he said.

The European Commission expressed regret over Austria’s decision and said it believed “migration is a global challenge where only global solutions and global responsibility sharing will bring results”.

Advocates of the pact emphasise that it is a framework agreement that does not impinge on the sovereignty of signatory states, and suggest that critics have either misunderstood it or are playing politics over migration.

Louise Arbour, the UN special representative for international migration, said this week that “a lot of reasons that are advanced for disengaging are either mistaken or do not reflect what this global compact is all about”.

“One of its main objectives is to reduce, if not to eliminate altogether, unsafe, chaotic, illegal poorly managed migration, which is in nobody’s interest – not the migrants, not the host communities, not the countries of origin,” she told Reuters.

Brussels is suing Hungary, the Czech Republic and Poland for refusing to accept refugees under an EU relocation plan.

Local media quoted right-wing president Kolinda Grabar-Kitarovic as saying she will not sign the deal, but that may be because it comes under the foreign ministry’s remit.

Croatian foreign minister Marija Pejcinovic Buric said on Friday she thought the president supported the pact and expressed “surprise” at reports that she would not sign it in Marrakech.