Mexican police halt migrant caravan on way to US 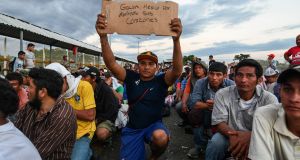 A Honduran migrant taking part in the caravan holds up a sign reading “Thank you Mexico for opening your hearts to us”, while he waits to cross the border from Ciudad Tecun Uman in Guatemala, to Ciudad Hidalgo, Mexico earlier this week. Photograph: Orlando Sierra/AFP/Getty Images

Hundreds of Mexican federal officers carrying plastic shields have blocked a Central American caravan from advancing towards the US.

The stand-off came in Arriaga after several thousand of the migrants turned down a chance to apply for refugee status and obtain a Mexican offer of benefits.

At a meeting brokered by Mexico’s National Human Rights Commission, police said they would reopen the road and only wanted an opportunity for authorities to explain Mexican president Enrique Pena Nieto’s offer of shelter, medical attention, schooling and jobs to Central Americans.

Migrants rejected the plan on Friday night and said they wanted to at least arrive safely in Mexico City to discuss the topic further.

Amid the road block, thousands of migrants remained on the road waiting to advance.

Those on and following the caravan were boisterous on Friday evening in their refusal to accept anything less than safe passage to the US border.

Sitting at the edge of the town square in Arriaga, 58-year-old Oscar Sosa of San Pedro Sula, Honduras, said: “Our goal is not to remain in Mexico. Our goal is to make it to the [US]. We want passage, that’s all.”

While such migrant caravans have taken place regularly over the years, passing largely unnoticed, they have received widespread attention this year after fierce opposition from US president Donald Trump.

On Friday, the Pentagon approved a request for additional troops at the southern border, likely to total several hundred, to help the US Border Patrol as Mr Trump seeks to transform concerns about immigration and the caravan into electoral gains in the November 6th mid-term elections.

Defence secretary Jim Mattis signed off on the request for help from the Department of Homeland Security and authorised the military staff to work out details such as the size, composition and estimated cost of the deployments, according to a US official.

Stoking fears about the caravan and illegal immigration to rally his Republican base, the president has insinuated gang members and “Middle Easterners” are mixed in the group, though he later acknowledged there is no proof of that.

Mexico’s government has allowed the migrants to make their way on foot, but has not provided them with food, shelter or bathrooms, reserving any aid for those who turn themselves in. – AP