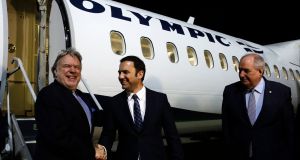 Commercial flights between Greece and Macedonia have resumed after a break of more than a decade, as part of reconciliation efforts centred on a historic name-change deal between the Balkan states.

Greece halted the flights in 2007, in protest at a decision by Macedonia’s then nationalist government to name Skopje’s international airport after Alexander the Great, ruler of ancient Macedonia.

Macedonia’s prime minister Zoran Zaev removed the name in February in a goodwill gesture to Greece, as the countries sought to overcome a 27-year dispute over the ex-Yugoslav republic’s name and what Athens called its wrongful claim to the legacy of Alexander.

In June, they agreed the country would take the name North Macedonia – removing any clash with the Greek province of Macedonia – and in return Athens would stop blocking its neighbour’s efforts to join the European Union and Nato.

In the latest boost to relations, an Aegean Airlines plane took off from Athens on Thursday evening bound for Skopje, carrying passengers including Macedonian deputy prime minister Bujar Osmani; the Greek carrier expects to fly both ways between Athens and Skopje twice a week.

During talks in Athens, Mr Osmani called the air link “a symbol to the genuine relations that we are building” and tweeted: “Greece has become our greatest ally, neighbouring friend and biggest lobbyist within the EU.”

The name deal must still be approved by parliaments in both capitals and faces strong opposition from nationalists on either side of the border, but it overcame a major hurdle this month when Macedonia’s assembly narrowly agreed to start making constitutional changes stipulated by the pact.

Deputies and legal experts are now drawing up the draft amendments, and the government hopes to submit them to parliament for debate in the coming days.

Leaders of VMRO-DPMNE, which ran Macedonia from 2006-2017, accuse the ruling parties of bribing and threatening its members to secure votes; the government makes similar allegations against the nationalists, and deputies who crossed the aisle to back the name-change deal have been given police protection.

VMRO-DPMNE was finally ousted last year after Mr Zaev released wiretaps that implicated top members of the party in a range of serious crimes, including corruption, vote-rigging and illegal surveillance of some 20,000 people.

The party’s property assets were frozen this week as part of a money-laundering inquiry, and prosecutors announced the launch of a preliminary investigation into Macedonia’s nationalist president, Gjorge Ivanov, over his refusal to sign the name deal and other legislation.

Former VMRO-DPMNE leader and ex-premier Nikola Gruevski, meanwhile, has been ordered to report to prison by November 8th to start a two-year sentence for graft.