We may be used as Brexit pawns in British negotiating game 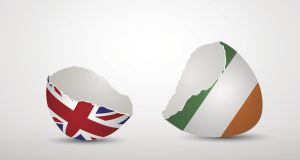 Brexit effect: It will be challenging to find solutions to minimise the impact on trade between Ireland and Britain and to avoid disruption to the the peace process. Illustration: Getty

With the date for the triggering of the British exit from the European Union drawing close it is clear that Ireland is going to face two enormous challenges in the years ahead.

The first and obvious one is to devise a coherent plan to cope with the political and economic consequences of Britain’s departure. The second, and potentially even more difficult challenge, is to develop a new relationship with our EU partners in the years ahead.

For nearly five decades the Irish political and administrative system has proved itself very good at maximising the benefits of EU membership for this country but it has not been as good at educating ordinary citizens and keeping them informed about the benefits of the European project.

Irish people are generally aware of the economic benefits of EU membership but they are not nearly as attuned to the fundamental ideals underpinning the bloc which have created a zone of peace and prosperity probably without parallel in human history.

Those ideals are going to be tested right across Europe in the months and years ahead.

For a start there is the problem of how to deal with the departure of the UK. Contrary to some commentary, Irish political leaders and officials have engaged in a major diplomatic offensive to make all of the other member states aware of just how damaging Brexit will be for this country.

This is well understood across the EU and most importantly the lead negotiator for the EU in the Brexit talks, Michel Barnier, is fully aware of the Irish problem.

However, that does not mean that it will be easy to find solutions to minimise the impact on trade between Ireland and Britain and to avoid disruption to the peace process.

Workable solutions will require flexibility and goodwill from the British and the unionists in the North but there is no guarantee of either.

The dramatic improvement in Anglo-Irish relations over recent decades should not blind people to the danger that we may be used as pawns in a British negotiating game.

The assurances of British prime minister Theresa May and her senior ministers that they don’t want to see a return to the hard Border of the past are designed to assuage Irish concerns but there must be serious doubts about whether such assurances have any meaning.

The fact of the matter is that the kind of Border we end up with will depend on decisions taken by the British government about the nature of the relationship they want to have with the EU in the years ahead.

All the indications are that the May government is hell bent on the most destructive form of UK exit from the EU, involving a departure from the customs union as well as the single market. That will necessitate the return of a hard Border for trade on the island of Ireland whether we like it or not.

British assurances about the Border will be meaningless if they leave the customs union as well as the single market. Some of the tough talk on the customs union may be a negotiating ploy but May will find it very difficult to talk herself down from a hard Brexit even if she wants to.

One potential outcome from the British mantra about no return to a hard Border is that, if and when it does come about, people in this country may be inclined to blame the EU for the development.

There is a real danger that over time Irish attitudes to the EU could become soured and it would encourage a campaign for an Irish exit which is already simmering away just below the surface.

Another development which could feed into this mood is the manner in which relations with the rest of the EU develop over the coming years. Already tentative discussions about EU security, in the light of the threat posed by Russian president Vladimir Putin, has prompted predictable howls about a European army.

European Commission president Jean Claude Juncker has recently outlined five pathways the EU could follow in the year ahead with the commitment to “ever closer union” being one of them.

Ireland’s EU commissioner Phil Hogan has already stated his firm view that ever closer union is not the way to go, at least for the present. He is advocating a drive to make the EU work better through improved communications with its citizens a key part of that process.

Whichever of Juncker’s pathways the EU ultimately goes down Ireland will face difficult decisions. It will require the Government to formulate a clear strategy for what it wants, allied to a programme to explain in detail to the Irish people where it wants to go.

For instance, is the common travel area with the UK more important to us than freedom of movement for Irish citizens across the EU?

One of the country’s leading economists Kevin O’Rourke pointed out in this newspaper last month just how important it is for Ireland’s future prosperity to stay with the EU rather than get dragged back into a subservient client relationship with the UK.

The economic facts are irrefutable but politics does not always follow along logical lines.