Thousands of protesters from across Poland joined a demonstration in Warsaw against a top court ruling last week that amounted to a near-total ban on abortion in the predominantly Catholic nation. Video: Reuters 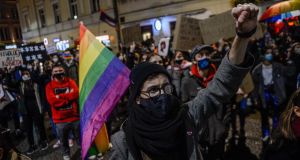 A man gesticulates as he protests against a court ruling on tightening the abortion law in Poland, in Warsaw. Photograph: Omar Marques/Getty Images

Polish women’s groups and their supporters were braced for violent clashes with police and neo-fascists on Friday night as street protests against an almost total ban on abortion in Poland enter their second week.

A week ago Poland’s highest court ruled unconstitutional the termination of pregnancy in the case of congenital defects, saying it amounted to “eugenics” that denied “an unborn child the respect and protection of human dignity”, in a move that further restricted the country’s already strict abortion laws.

Since then Poland has been gripped by protests. Ahead of Friday’s demonstrations in Warsaw, police and water cannon were brought in from all over the country. Neo-Nazi groups were expected to hold counterdemonstrations.

“We fear it is going to get nasty tonight, I have never seen protest on such a scale,” said Antonina Lewandowska, a Warsaw-based women’s rights activist and sex educator. “We have protest in small towns, the countryside; farmers, taxi drivers and football fans all out joining the protest. I think the government underestimated the level of frustration.”

Previous attempts by the Polish government to tighten abortion laws, in 2016 and 2018, met with street protests and were abandoned.

But last week’s constitutional court ruling, which cannot be appealed once published, would in effect outlaw abortion except in the case of rape, incest or where the mother’s health is at risk. In 2019, 98 per cent of 1,110 legal abortions in the country were due to foetal defects. Women’s groups estimate that each year at least 130,000 Polish women have abortions either illegally at home or abroad.

The constitution ruling was made by judges on Poland’s constitutional tribunal, many of whom have close ties to the ruling Law and Justice (PiS) party; critics have questioned the legality of their appointments. One of the ruling judges in the case that led to the court’s order supported it in a private capacity when it was originally filed with the tribunal.

Bishops and conservative Catholics have welcomed the ruling as part of a wider push by the PiS to shore up traditional Polish values against what they see as an incursion of alien, liberal western thinking.

PiS leader Jaroslaw Kaczynski, who promised Poland’s powerful Catholic church tighter abortion rules in 2015 to secure its support, has condemned the protests as a “threat to the Polish nation”.

Political analysts suggest reviving the abortion issue was a gamble by the 71-year-old deputy prime minister to galvanise support among conservatives after recent rows prompted a government reshuffle.

But what began as a move to curb abortion has exploded into an angry vote of no confidence in the PiS administration and its powerful leader, as it grapples with a series of scandals, the Covid-19 crisis and a growing battle with the EU over the rule of law in Poland.

Unnamed PiS politicians have expressed their concern to Polish newspapers that their previously unquestioned leader may finally have gone too far. President Andrzej Duda, a Kaczynski appointee, has already softened his tone and called for compromise.

“Kaczynski is, as ever, unpredictable and may turn this to his advantage, but it looks increasingly unlikely,” said Piotr Buras, the European Council on Foreign Relations’s Warsaw office head. “He is detached from reality and simply doesn’t understand the strong emotions this provokes.”