Coronavirus: What can Ireland learn from an Australian state’s Covid-19 success? 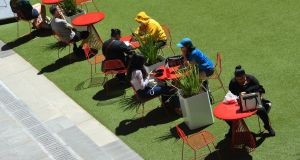 For months, the state of Victoria in Australia has had one of the world’s longest lockdowns, imposed to tackle a second Covid-19 wave. For two days this week, it had no new cases.

Hospitality and shops have reopened. Residents have finally been able to leave their homes freely. So, could Ireland take on this Melbourne mentality and learn lessons from its success?

In July, Victoria’s capital Melbourne went into lockdown following a rise in cases linked to citizens returning from abroad, even though they were held in hotel quarantine on their arrival.

In August, new cases in the state surged to more than 700 per day. In reply, the state’s authorities imposed stay-at-home rules, along with a rigorously-enforced nightly 9pm to 5am curfew, on Victoria’s 6 million residents.

Welcoming the latest zero new cases, the state’s premier, Daniel Andrews, said: “This belongs to every single Victorian who has followed the rules, stayed the course, worked with me and my team, to bring this second wave to an end.”

Australia was heralded as a global success story in how it dealt with its first Covid-19 outbreak. By the end of April, the country of 25 million had recorded about 7,000 total cases and less than 100 deaths.

The country’s borders were closed to everyone except returning citizens in March – the key action necessary to deal with outbreaks, according to Dr Niall Conroy, an Irish consultant in public health medicine who recently moved back to Australia from Dublin.

“It’s very difficult to deal with a flood in your bathroom if the tap is still running. Victoria has been allowed to just concentrate on the cases and the transmission chains that are already there.”

Internal state borders were shut too, however. Currently, all Australian states have their borders closed to Melbourne and its surrounding metropolitan areas, which has allowed its public health teams to focus on driving down community infections.

Having an open border makes tackling cases difficult, says Dr Conroy: “Ireland is trying to juggle pre-existing cases and chains, as well as managing new cases that are coming into the country and seeding new outbreaks.”

The Australian border controls are likely to stay in force for months to come. A week after the March border closure, the Australian federal government imposed a mandatory two-week hotel quarantine on anyone arriving into the country.

So far, 130,000 people have been quarantined in this fashion. Initially, the Australian government leased the hotels. Since July, most returning travellers have had to pay for their own quarantine, costing about Aus$3,000 (about €1,808).

However, failures in the quarantine system – blamed on breaches of rules by state-hired security guards – in June led to Victoria’s second outbreak, which played a large part in Australia’s case total rising to roughly 27,000 and deaths to 905. That is now the subject of a judicial inquiry.

The Republic still has an open Border with the North and allows travellers from overseas to “restrict movement” for 14 days upon arrival. Unlike Australia, it hasn’t enforced “institutional isolation”.

“The best compliance you tend to get, on a voluntary basis, with public health measures is about 70 per cent. That’s at very best,” says Dr Conroy. “Unenforced home quarantine probably isn’t all that useful.”

Like Ireland, Victoria has centralised public healthcare, though funding for the system was decimated over the years and the amount Victoria spent on its public health budget paled by comparison with neighbouring New South Wales.

“People get very obsessed about contact tracing,” says Dr Conroy. “Usually, when we do contact tracing, it’s for small numbers of people, for example, when there’s a household meningitis outbreak or measles in a prison.

“Where Ireland is now, contact tracing should be regarded as an adjunct to population-level restrictions. Public health units are concentrating on complex high-risk settings, and that’s the best use of resources at this point.”

When the contact tracing system was overrun in Victoria, rural centres there, like Colac, took it upon themselves to do their own contact tracing when cases broke out at abattoirs and schools, as centralised teams were taking too long.

By early September, the Victorian state government had created five mobile tracing units, and brought in tech company Salesforce to handle the data created and to accelerate contact tracing.

So far, 3 million coronavirus tests have been carried out in Victoria, peaking at 30,000 tests in a single day. Unlike in Ireland, GPs are not involved. People go to a centre, provide their details and get tested for free. Results are back in 24-48 hours.

The lesson from Victoria? Use this lockdown to improve contact tracing capacity.

In early July, with case numbers there averaging about 100 per day, people living in Melbourne were told to stay at home. Pubs closed and restaurants went back to takeaway services. Face masks became compulsory everywhere, including outdoors.

Social gatherings, weddings and funerals were heavily restricted. But by early August cases were still rising. Then, Mr Andrews introduced even tougher rules.

Harsher than Ireland’s Level 5, the restrictions brought Melbourne to a complete standstill. Strict limits were put on construction and manufacturing. Schools were closed, despite opposition at a federal level, along with retail outlets, hairdressers, and childcare facilities.

A night-time curfew was introduced, too, and, like in Ireland, a 5km travel limit was put in place. Exercise outdoors was limited to one hour a day and only one person per household could shop for groceries. Initially, the curbs were for six weeks. That then became eight.

Fines helped to ensure compliance. More than 19,000 such penalties have been levied. Police stopped vehicles trying to get into or out of the state capital, prompting complaints from human rights organisations against the police for allegedly abusing their powers.

A pregnant woman was arrested at her home for organising an anti-lockdown protest on Facebook. Nevertheless, the city was largely in agreement with the rules, leaving Mr Andrews with a 70 per cent approval rating.

Could Ireland copy a lockdown along these lines? Dr Conroy doesn’t believe so: “It’s Irish Government policy to live with the virus, so recurring lockdowns are part of that. So, you probably wouldn’t get widespread compliance with Victorian-style lockdowns.

“Whereas in Victoria, once they’ve eliminated local transmission, there won’t be new imported cases, so the likelihood of another lockdown, assuming they manage their reopening well, is low. In Ireland, it’s pretty much inevitable.”

The nearly four months of lockdown have taken a toll on Victoria, however. The demand for mental health treatment has jumped by nearly one-third for both adults and children. People are now able to qualify for 10 free, or heavily subsidised, therapy sessions.

Mr Andrews has been attacked by federal and state politicians, business leaders, and even some health experts for seemingly pursuing an eradication strategy, although he denies this was ever his aim.

The state premier’s decision to stay in lockdown in the city until Melbourne’s 14-day case average was below five has had devastating impacts. The Stage Four restrictions will cost Melbourne’s economy Aus$61 billion over five years.

With community transmissions now under control, there’s a sense, despite everything, of deep relief and euphoria as things start to open up again in Melbourne.

There are certainly lessons to be learned from Victoria in terms of border control, quarantining, and using lockdowns to bolster the public health response. Ireland, though, will need to consider the pros and the cons if it wants to copy the state.